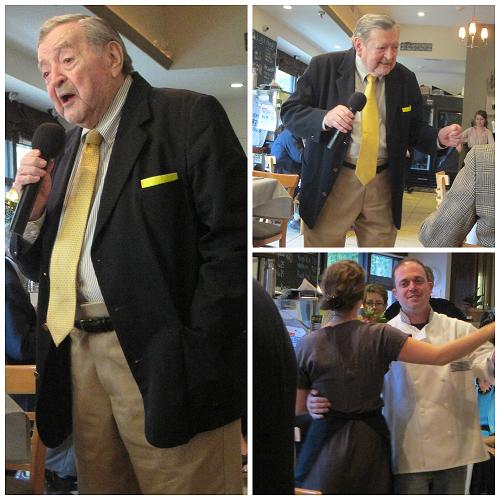 Harry Prime doesn’t let anyone piss in his pockets and he doesn’t forget a friend. Both poles of his personality were on display at his dinner show at the Epicure Cafe on Saturday May 24th. And, oh yeah, he can still sing.

Some people go to Harry’s shows to hear about Grace Kelly or the picture postcard stories from the good old days. And Harry doesn’t disappoint. He can spin a clean, upbeat tale as well as anyone, evoking the old neighborhood with the same precision as he croons the rolling bass notes of Summer Wind.

But we go to his shows for the scrappier, funny, and sometimes profane stories about growing up in East Falls, living on the road when he was a singer in a big band, and what life is like when you’re pushing 95.

Stories from the road

Harry has often said that life on the road in the 40s and 50s was a series of mostly “less drunk and completely drunk” nights, but when he told the story of the gabardine jacket to the Epicure crowd, it offered a peek into the craziness of a crowded touring bus full of “vipers (pot smokers) and drinkers.”

In the late 40s, Harry had begun to earn real money working for the Ralph Flanagan Orchestra and one day rewarded himself with a new gabardine coat. “The coat was beautiful,” he said, “with epaulets on the shoulders.” He hung it at the back of the bus as the orchestra rolled on to its next destination on the tour. When they arrived, he found the coat dripping wet and smelling of urine, with one pocket still brimming.

“It’s always the sax players,” said Harry, as he explained the drunk who’d relieved himself at Harry’s expense. He settled the score shortly afterward, with only one complaint from orchestra leader Ralph Flanagan—“Couldn’t you have hit him in the gut, not the mouth?” Flanagan couldn’t afford a sax player with a banged-up mouth.

The show goes on

The crowd at the Epicure roared with laughter as Harry launched into the next song without a pause.

Peggy King, sitting beside him, tapped her foot to the tune and Mike Labetti and Felicite Moorman (co-owner of Hohenadel House), danced an impromptu West Coast swing behind him.

At another pause, we saw Harry’s softer, more sentimental side as he spoke about “his great friend” Ron Astle, who’d moved away to Florida over a year ago. He remembered how they’d first met years ago, with Ron giving Harry a CD of Harry’s songs.

He also spoke fondly about their partnership at previous Epicure performances, with Ron playing background tracks while Harry sang. We could hear a hint of sorrow in his voice as he told the story about Ron moving away, a slight tremor in that weathered baritone. And he wasn’t the only emotional one there.

I’d jokingly warned Felicite (who was attending her first Harry Prime performance) that Harry liked to work blue, but I couldn’t know how much she would be touched by the whole performance. I didn’t know her background as a dancer, singer and big band aficionado. (She knew plenty about Harry Prime and Peggy King.) At the end of the evening, I overheard her saying, with tears in her eyes, that it was one of the best nights of her life.

It made us wonder what a thrill it would be to have Harry and Peggy (and Felicite!) sing a few songs in the ballroom of Hohenadel House.

After all, Harry knew the house very well when Felicite mentioned it to him. What if the three of them performed at one of the most historic houses in town? As Harry might say, that would be in the pocket.

7 thoughts on “An evening with Harry Prime at Epicure Cafe”