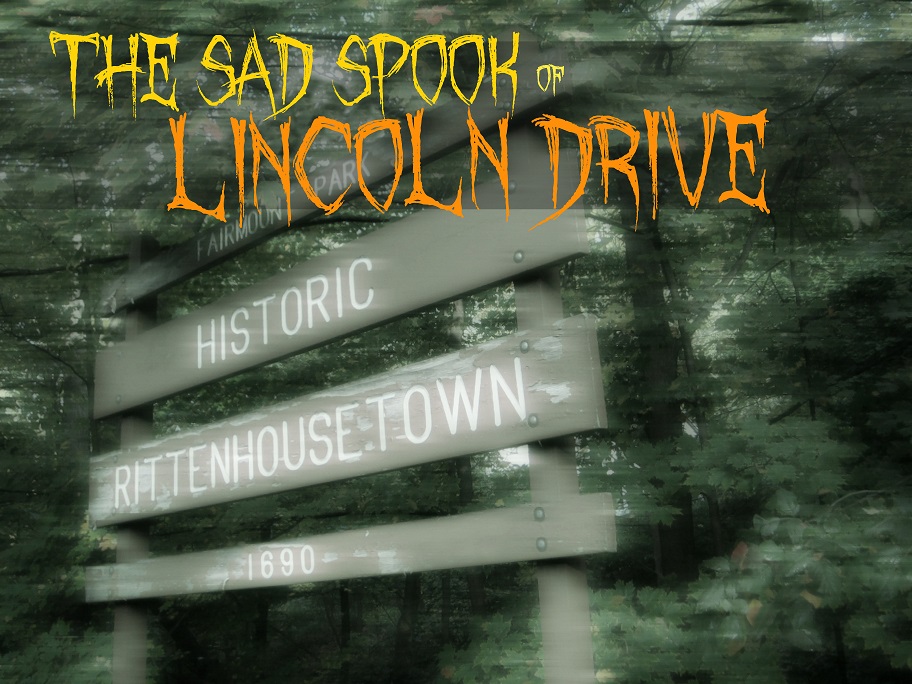 Our local ghost stories continue with this latest tale from the Evening Bulletin, April 8 1932, about the ghost of a sad, suicidal tenant who once boarded there with early Rittenhouses. Rittenhouse is of course a huuuuuge name in Philadelphia — not just in Center City where David has his own square, but here in our Wissahickon, early Rittenhouses built America’s first paper mill in what’s now a National Historic Landmark off Lincoln drive (declared in 1992).

According to an article in April 8th’s Evening Bulletin from 1932, Rittenhousetown back then was an old renter’s village outside the local entrance to Fairmount park. Four families of Park employees actually lived in the old houses — a few had been updated with modern conveniences, but others (including Mrs. Pinkerton’s, farthest from Lincoln Drive) got by with privies and kerosene well into the 20th century.

Not much had changed here from the days David Rittenhouse was a boy. Author Laura Lee interviewed a young girl, Dorothy Giesey, whose father, Paul, worked for Fairmount. Dorothy was not thrilled with her family’s “old” house, nor the distance she had to walk to get to the store.

Another resident, Mrs. Pinkerton, showed off a trunk full of regional artifacts, including a Rittenhouse School bible, a Revolutionary War cannonball (found in nearby woods), some silken pocketbooks the Rittenhouse girls made, and “Mrs. Jacob Rittenhouses’s dainty kid slipper,” which kinda sounds like something a serial killer would hide under his bed, but we’re not pointing fingers… For all we know, Mrs. Pinkerton had absolutely nothing to do with the mysterious clean-shaven man in a dark suit who was often spotted roaming the property, an air of sadness about him. Usually seen from a window — real as day one minute, and then gone the next.

Supposedly, he’s the ghost of a former tenant of “Grandma Rittenhouse” who lived in the main house on the grounds. This unnamed gentleman was plagued by fear & doubt, and worried constantly about making his rent on time.

One night, he snapped:  hanged himself on the maple that still stood at the front of the house in 1932 — perhaps the same one that’s there now? Certainly that lower branch is angled nicely for a noose,  no? And how handy, too — Grandma Rittenhouse’s home features convenient “coffin doors” — a floor-to-ceiling second-story opening, used back in the days of home memorial services. Before embalming was commonplace, you did NOT want to tilt a loaded coffin upright. Ever.

So coffin doors made it easy to slide those suckers out with as little “sloshing” as possible (sorry). Sometimes coffin doors led to a parlor, sometimes (as in this case), they led outside, probably to a wagon for the graveyard.

Not infrequently, coffin doors were double, with an exterior door and an interior one that was often used as a carrying platform and also a tabletop “stage” for viewing. More expensive than the singular version, these babies really paid for themselves after the fourth funeral, ha.

So next time you’re stuck in traffic on Lincoln Drive, see if you can spot the coffin doors through those shady maples…

And perhaps while you’re looking, out of the corner of your eye, you’ll catch a glimpse of that sorrowful man in a dark suit, still wringing his hands over money he’ll never make.

(transcription of article below)

Ah, David Rittenhouse, if you could see “Rittenhousetown” today!

Your old home of whitewashed stone is still there by the banks of Mill Run creek, facing Lincoln Drive, a short distance from the Rittenhouse street entrance to Fairmount Park from Germantown.

It stands there, solid and stable, just as it did that April 8, 200 years ago, when you were born under its slanting roof. Across the creek, four other homes of your illustrious family still stand, with but few changes on their exteriors.

Spring comes to the woods and Wissahickon valley… the thrill and romance you must have felt are still poignant there. Little boys play around the old rustic bridge back of the house just as they must have in your day.

But there are many changes!

Automobiles are as thick as flies on the road in front of your house and the great walls of the Kenilworth, the kind of home people live in today, simply dominates the scene.

The little girl who lives in your house now, Dorothy Giesey, doesn’t like it there one bit. She wrinkles up her nose disdainfully and says she doesn’t like old houses like this, and anyway, it’s so far to the store. She wishes they would move away. Maybe they will, too, if the Bicentenary Committee now celebrating your birth has its way and converts the place into a Rittenhouse museum.

Of course, they do have some conveniences, Dorothy admits. They’ve put in electric lights and such things. Which is more than can be said of the Rittenhouse houses.

Why, the one across the stream farthest from the road (the one built by old Jacob C. Rittenhouse, where one of his descendents, Mrs. William Pinkerton, now lives) why, over there they’re still using kerosene lamps!

Mrs. Pinkerton was born there and there she raised her 13 children (11 of them are living) and she has a deep reverence for the Rittenhouses — first of all, for old William Rittenhouse who in 1707 built the house in which David was born, near the site of his paper mill — the first in America. This and her own home are the oldest of the group.

She reveres the name of David Rittenhouse, one of the first scientists of America, internationally famous as an astronomer and clock maker. He was the first professor of astronomy at the University of Pennsylvania.

Mrs. Pinkerton has a box of relics upstairs in an old trunk, a photograph of David Rittenhouse, Mrs. Jacob Rittenhouse’s dainty kid slipper, and an old Bible from the Rittenhouse school, which stood up there on the hill when this was an industrial community with paper, textile and grist mills, before Fairmount Park was extended along Lincoln Drive.

She also has several little silken pocketbooks made by the Rittenhouse girls, a cannon ball from the Revolution, found there in the woods, and a tiny cap, yellowed by the years, which belonged to William Penn’s daugher, also one of her ancestors (9th generation).

But Mrs. Pinkerton’s children are no more interested in the relics and the Rittenhouses than are the Paul Gieseys. The Gieseys are one of the four families of Park employees who live in the houses.

“They never had time for old furniture and such, ” — and what old pieces the family once had, have long since been converted into firewood by the succession of tenants.

All, however, are interested in a clean-shaven man in a dark suit, who they whisper, walks about the ground now and then. When Mrs. Pinkerton was a child, Grandmother Rittenhouse had a boarder — a silent man who worried because he couldn’t pay his board. One night he hanged himself on the old maple which still stands in front of the house.

It is he who walks about the grounds: All of the Pinkerton family have seen him, as have many outsiders. They see him from the kitchen window and when they hurry outside in a blink he vanishes. A figment? Not to those who have seen him … he is as real as the maple itself!

But in spite of restless ghosts, buzzing automobiles and apartment buildings, the Valley has retained its peaceful atmosphere. The picturesque beauty of these houses has never been ruined by “improvements.” Indeed — thickets, old-fashioned gardens rounded by marine shells & rocks, the grape arbor in the back by the babbling brook, the picket fence and the “coffin door” on the 2nd floor of the David Rittenhouse home, where coffins were hoisted in for funerals — they are all still there as they once were!

4 thoughts on “Another East Falls Ghost Story from the Chadwick Papers: Rittenhousetown”