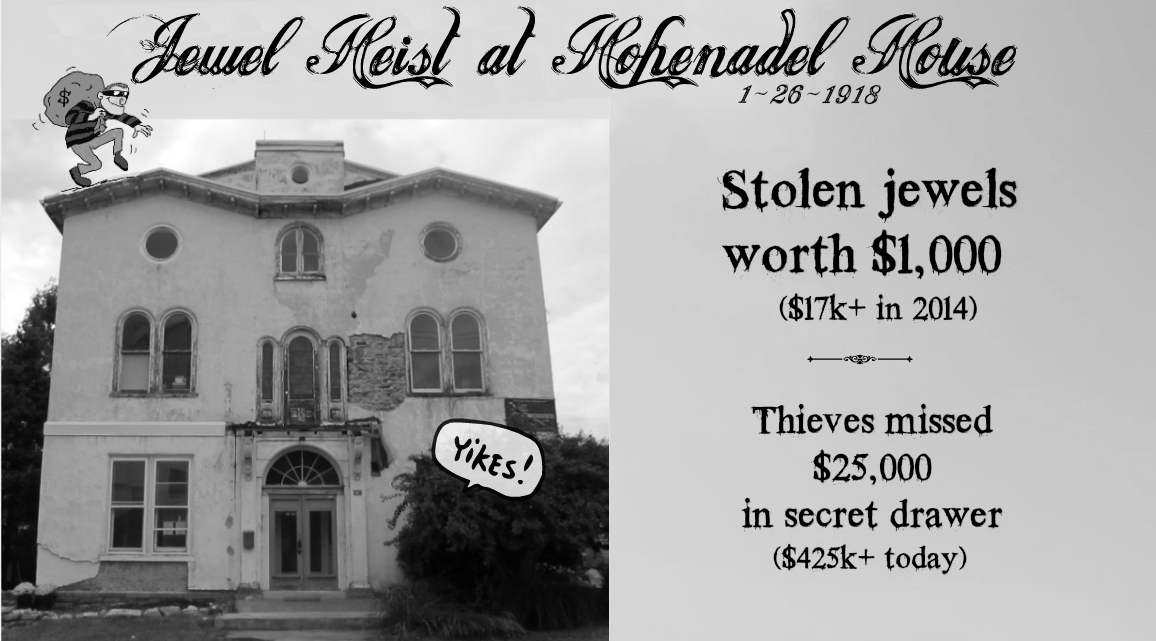 Thank you, John C. Hohenadel of Lancaster, PA — a distant relative of our own “brewer branch” here in East Falls. He’s been collecting Hohenadel breweriana for over 30 years, and also has uncovered lots of interesting clippings he’s been so very kind to share with us.

Here’s one from a break & enter at the mansion on Indian Queen Lane  (from the Evening Public Ledger, January 26, 1918): Jewelry valued at $1000 was stolen last night when the home of John Hohenadel, a wealthy brewer, residing at 3617 Queen Lane, Falls of Schuylkill, was robbed while occupants of the house were attending a patriotic service at America Hall* 3536 Ainsile (sic) street. Police of the 22nd st and Hunting Park station are investigating. Mr. Hohenadel is president of the Falls of Schuylkill Bank.

Other Jewels of an aggregate value of $25,000 locked in a secret drawer, escaped the attention of the intruders.

Mr. Hohenadel and his family did not return until about 10 o’clock. The maid was the first to arrive home and found the house ransacked from top to bottom, but no trace of the operators could be found.

*This building eventually housed Hohenadel’s business offices. It’s been under renovation for new businesses, including a small grocery/deli and a Mack Stylist location catering to brides.
(PS deliberate typo: the article seems to spell the address “Ainsile”)

One thought on “When Hohenadel Lost (some of) His Family Jewels…”