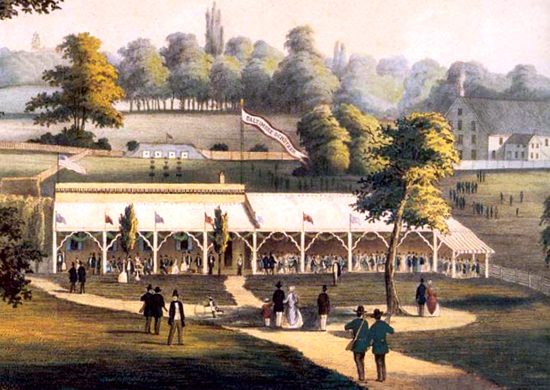 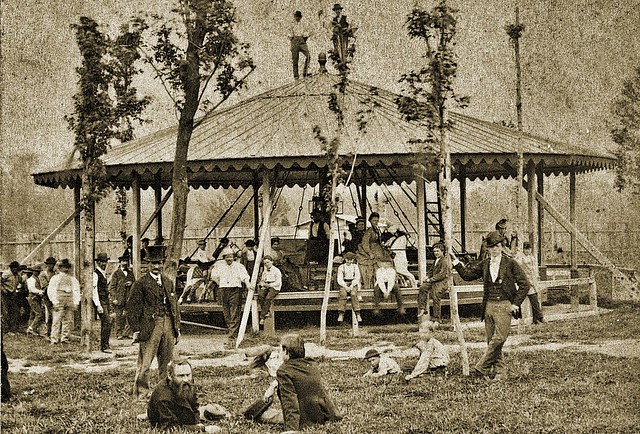 According to George, the pic is of the newly built merry go round (also called ‘flying horses’) in Sept. 1873. While the men were shooting, the women and children enjoyed the other features of the park.

To see the original, check out George’s Flickr. Thank you very much George for the beautiful pic!

Unless you’re from Georgia, guns and beer don’t mix, right?

It seems crazy now, but there was a time when it was perfectly acceptable in Philadelphia to spend a day shooting and drinking – and Schuetzen Park in East Falls was a popular place to do it.

The 19.5 acre park, located on Indian Queen Lane not far from Hohenadel House, was purchased in 1870 by a German-American rifle club called the Philadelphia “Schuetzen Verein” (directly translated from German as “Shooting Club”).

Club members practiced both short and long-range shooting at various wooden targets and, with the advent of the clay targets in the late nineteenth century, trap shooting. They often participated in matches that pitted individual shooters, as well as communities and clubs, against each other. This 1869 photo below depicts hundreds of members of Philadelphia’s German-American shooting club — their faces copied from photographs — on their shooting grounds off Indian Queen Lane in East Falls.

The club also held Schutzenfests, shooting festivals whose origins dated back to the Middle Ages in Germanic parts of Europe. Winners received trophies, prizes, and local and regional recognition from their victories. The festivals were also occasions to express German pride as well as patriotic sentiments about the United States and the role of Germans in building the nation.

These expressions seemed necessary, given that many Americans in the late 19th century believed that Germans were “foreigners” and not “real Americans.” At a Schuetzen Park festival in 1882, a speaker claimed that Daniel Pastorius, the founder of Germantown, arrived shortly before William Penn, proving that the “German stock took root at the same time as the English” in the founding of Pennsylvania.

Daily life at Schuetzen Park was quite colorful, as described in the Philadelphia Times (August 6, 1893):

“On every Thursday morning during the summer the men of the club repaired with their rifles and banged away at the targets with most encouraging results. In the afternoons the children, wives, and sweethearts of the marksmen went out from the city with baskets fairly groaning under their wealth of good things and the remainder of the day and evening was spent in dancing and merry-making.”

Some of the Park’s amenities included a “dancing hall, swings, flying horses, stables, a music room” and, of course, a German specialty whose popularity was then sweeping the nation — lager beer.

The Park’s greatest moments were on May 15 and 16, 1871, when the German victory in the Franco-Prussian War sparked a massive celebration at Schuetzen Park. Reports at the time mention a “nine-mile long” procession of revelers in Philadelphia, many of whom found their way to the new park.

Attendance at Schuetzen began to wane in the 1880s with the passage of the Brooks High-License Act, which regulated the sale of alcohol in Pennsylvania and increased the prices of liquor licenses. The result, according to The Philadelphia Times, “did away with the greatest source of revenue for the picnics held at Schuetzen Park.” The Park was eventually condemned in 1893 to make room for the new reservoir and the club began a search for a new park. Locations such as Pastorius Park were considered, but were discarded because Chestnut Hill was considered too built up for the discharge of firearms in its vicinity.

10 thoughts on “Bullets, beer, and Bavarians at Schuetzen Park”