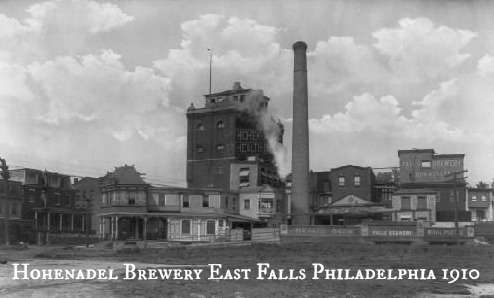 Our Höhenadel timeline jumps around quite a bit — records in the 1800’s were poorly kept, and complicated endeavors such as moving households or establishing businesses could take years (subsequently, important dates tend to overlap).

Höhenadel history in East Falls begins with a veritable boat load of bakers & brewers who came to America from the southern Rhine region of Germany in the 1850’s.

They dispersed throughout Philadelphia and surrounding counties — most started taverns or saloons, but at least one branch of Höhenadels got as far as Lancaster. Young brothers John & Jacob spent years on a family farm but they both had too much of the family business in their blood to stay put.

As young adults, the boys found their way to the suburban outskirts of Philly, where each founded his own Hotel/Brewery.

John’s was City Park Hotel and Saloon, at 29th Street and Pennsylvania Avenue at the entrance of Fairmount Park: And Jacob called his business The Falls Park Brewery, so named because it was located next to a local waterfall and park (as well a popular railroad station) on Ridge, at the intersection of “Mifflin Street” — known today as Midvale Avenue. The beautifully-landscaped grounds, dotted with dramatic natural springs, were a very popular setting for parties and picnics: This property — previously the old Steppacher brewery, which Jacob began renting from Peter Schemm in 1870 — included six wooded acres stretching up to Indian Queen Lane, an area known as “Dutch Hollow,” named for the German (“Deutsch”) stonemasons who first settled here. The rocky landscape included several caves and, later, vaults and tunnels for the storage and transportation of beer.

The third floor above the brew house was a fully-functioning hotel, serving food and drink in their dancing saloon. Further survey details about the establishment situated at Schuylkill Falls, 21st Ward, Philadelphia include:

Buildings erected 1858.
– Scuttle & stairs to the roof.
– Cornice of wood.
– Walls 2.5 feet thick.
– Floor of the brewing room of wood.
– Premises warmed by the natural heat of brewing kettles
& 1 cooking stove in kitchen of 3rd floor, well secured.
– No other fires on the premises.
– Fuel Anthracite coal.
– Rooms lighted by stearin candles.
– No steam boiler on the premises.
– No new barrels manufactured at the place.
– Few wood sharings made in coopering shed.
– Lightning rod with 3 points on the building.
– Hoisting apparatus outside, communicating with every floor.
– No ladders on hand.
– Large wooden water tank in the brewing room, 10 feet above the ground,
containing about 64,000 gallons of water, supplied by a never failing spring.
– 400 feet 1.5 inch India rubber hose kept on different places of the brewery
which can be attached to 2 water cocks on water tank in case of fire.
– No other provisions for extinguishing fire.
– No watchman on the premises.
– Hands employed living in the building.
– 2 brewing kettles in the brewing room, enclosed by brick walls
with brick under, in proper distance of woodworks.
– No malt kiln or still on the premises.
– Lager beer manufactured only.
– External exposures as per plan.
– Care in management & general condition of the property: good.

Although Jacob Höhenadel and his family appeared to have enjoyed a prosperous life — living in a lovely mansion overlooking a successful business — life as a brewery owner took its tragic toll.

Like many mill/factory areas of major cities during the Industrial Revolution, East Falls was a hotbed of tuberculosis, typhus, yellow fever, and various other health issues related to urbanization (eg: environmental pollutants, inadequate waste disposal, overcrowding). In 1865, Jacob lost his daughter Sophia at 9 months old. Five years later, in 1870, he lost 16-month old Charlotte to a lung infection, and later that same year an unnamed 4-month old son from “spasms.”

Social disease was also rampant at the time, and the women’s temperance movement was quick to blame alcohol, including beer. In February 1874, local demonstrations generated tension and threats of violence! Saloons faced public backlash after tavern owners & drunken thugs squared off with policemen while bands of singing, praying women called for bars to close.  On the morning of October 29, 1874 a suspicious fire ripped through Schuylkill Falls Park Brewery,  causing losses of $45,000.

After the fire of 1874, Höhenadel’s string of bad luck continued. Jacob Höhenadel himself died from “brain congestion” at the age of 38 in July of 1876. Soon after, his wife Johanna developed a lung infection and died that August.

These years from 1874 to 1876, it appears, were highly unstable. As Jacob & Johanna succumbed to illness, the brewery changed hands numerous times, and their four children were divided among the surviving relatives: 12-year-old Elizabeth and 4-year-old Joseph moved in with cousin Gertrude Höhenadel and her husband Wilhelm Biermaas on North 12th Street. While no records remain of Elizabeth after a 1880 Federal census,  her younger brother Joseph died of tuberculosis before his 24th birthday.

The two other Höhenadel daughters moved in with their father’s older brother, the 52 year old  “Rev” John Höhenadel, still the owner of City Park Hotel. Seven-year-old Hannah lived to marry and give birth at 22 before dying two years later from tuberculosis; her toddler-aged son, Roy Eric, died a day after from malnourishment. The youngest Höhenadel, Amelia, turned out to live the longest of all of them — she was only a year old when her parents died, and passed away in 1980 at the ripe old age of 105.

Rev. John changed “Schuylkill Falls” to “the John Höhenadel Brewery” then died 8 years later from bronchial pneumonia. His son John was a successful machinest with no interest in the family business, so Höhenadel Brewery went to another relative — a cousin, most likely — John/Johann William Höhenadel who had worked his way up through the family ranks from lowly immigrant baker to competent brewer & business owner.

In 1875, John William Höhenadel moved his operation from its riverside location, up the hill to its final and most familiar location at the intersection of Conrad & Indian Queen Lane. He and his wife moved to 3617 Indian Queen Lane — Höhenadel House! — and then within three years he died of a lung infection at the age of 46. His widow Maria (also known as “Mary” on documents) became proprietor of Höhenadel Brewery for the next five years, up to her death in 1902.

John William & Mary had four children — the year they moved into Höhenadel House, their infant daughter died of whooping cough. Ten years earlier, the couple had lost their first son at only two days old. In 1892, another son, Ferdinand, died a bachelor at 28, while employed as a foreman at the plant and living at Indian Queen Lane with his family. By the Federal Census of 1900, only three people were listed at the Höhenadel homestead on Indian Queen Lane (mother, son & a servant girl from England).

Four years later, the only person left to inherit Höhenadel Brewery was this son, John W., who ushered in the company’s most profitable age yet. These years leading up to Prohibition saw a huge increase in Höhenadel’s output — the brewery was producing almost 30,000 barrels a year for Philadelphia’s thirsty citizens, with brands such as Indian Queen Ale, Alt Pilsner, Health Beer, Rival Porter, Trilby Export and Hohen-Adel-Brau.

This last John Höhenadel enjoyed health & prosperity, becoming president of the Bank of East Falls and then opening another Höhenadel Hotel before leaving Indian Queen Lane in the 1930‘s for a grand mansion that is now a posh venue for Penn Charter parties & events, called “Timmons House.”

Höhenadel Brewery closed for good on December 31, 1953, and the building was torn down about two decades ago.

Ed note:  The bulk of the research cited in this post was obtained through personal histories posted at ancestry.com, fact-checked with recorded documents when possible, supplemented with as many current citations as possible. This post is a work in progress; additional links, data, corrections, etc. to be added as efforts continue.