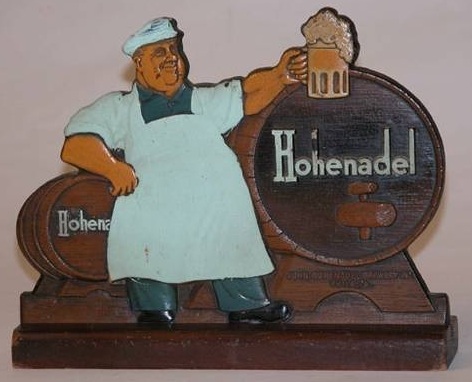 “Breweriana” is how collectors of beer stuff like to refer to the “collectible historical Brewery advertising” they seek, which comes in many forms: trays, coasters, taps, signs — just about any common item you can think of, a beer company has likely thought to slap its name on it.

If you scan breweriana auctions today, you’ll come across lots of interesting Hohenadel collectibles from home renovations here in Philadelphia, including things like 40 sheets of unrolled Hohenadel beer labels in an old garage and a pile of metal “cone top” beer cans from the 40’s.

So how does the Hohenadel brand name fare with collectors? According to OldBreweries.com:

“Items from breweries of this age tend to be more common and less valuable than some breweries. Early items can still be valuable as can rarer types of items…  John Hohenadel Brewery Inc. was in an active brewing city. Philadelphia, PA was listed as having 455 breweries, which is quite a few. Sometimes a large number of breweries can lead to an active collecting community that will be willing to pay more for breweriana items than other collectors.”

Want your own piece of Hohenadel beer history? Here’s a round-up of the kinda collectibles and reproductions you’re likely to find on sites like ebay, taverntrove, & vintagebeercollectibles:

The wooden sign with the cute beer guy and his frosty mug — the one at the top of this page? He’s called “The Brewmaster” and is a real favorite with collectors. A popular sign from the early 40’s, if you find one in good condition, it’s worth about a hundred bucks. Mint, a hundred and fifty.

There’s no doubt a whole lotta Hohenadel boxed away in the attics, closets & basements of East Falls, perhaps some of it will make its away to local garage sales & flea markets this season.

4 thoughts on “Hohenadel Breweriana — How Much is it Worth?”