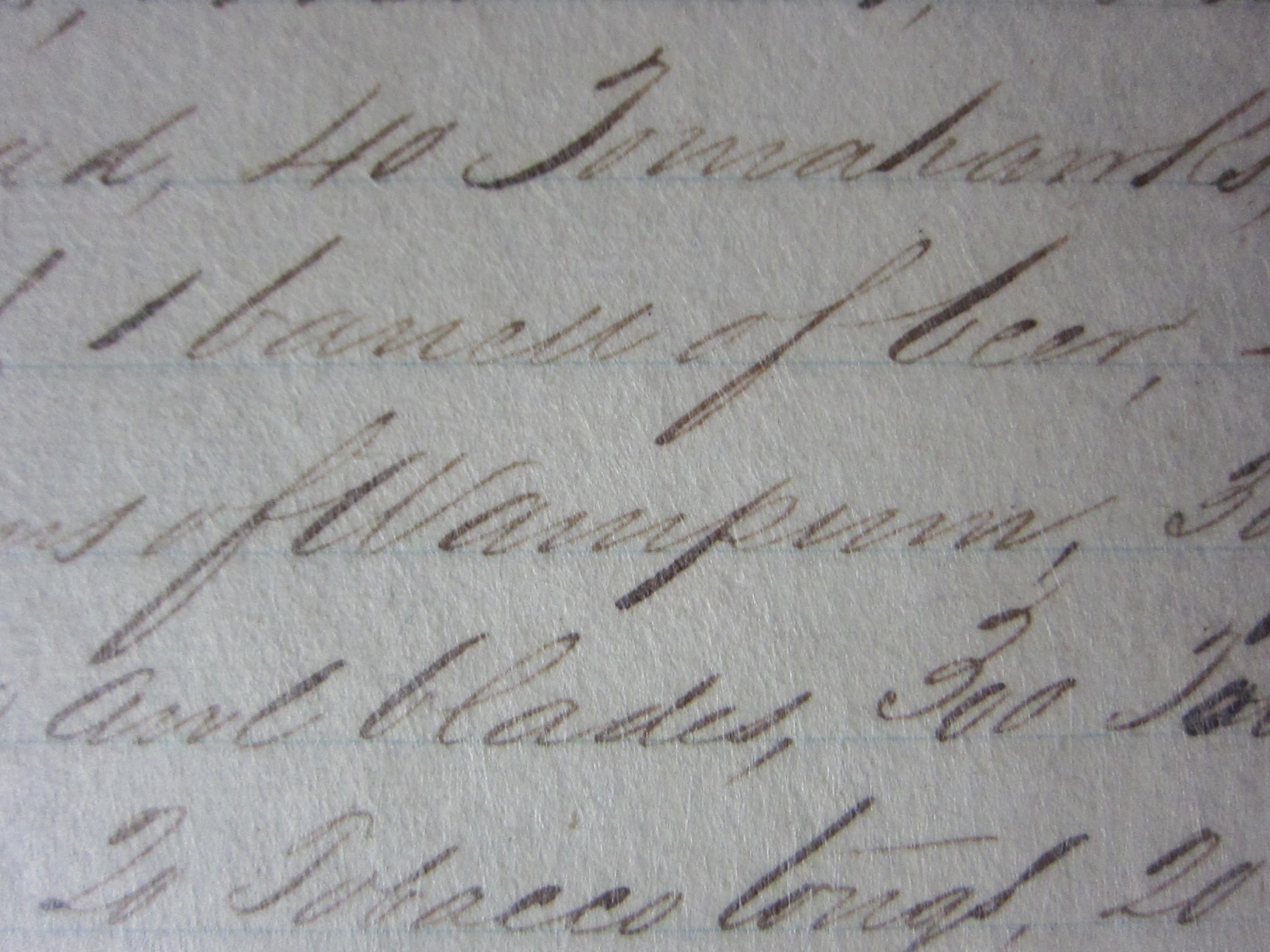 The Falls of Schuylkill Baptist Church (that used to share a border with Hohenadel House) kindly slipped us one of their print-ups of this fascinating document: William Penn’s 1685 Treaty with 13 Native American chiefs for the purchase of property believed to include East Falls. Does it? We’re still mulling that over, as we also explore the absurdity of land ownership to Native American sensibilities.

Meanwhile — what a bizarre collection of items on the trading table! How many of the objects and measurements can you guess? Pop quiz time! No grades or cash for perfect scores, but feel free to brag in the comments.

SAY WHAT? THE COLONIAL GLOSSARY QUIZ

1. To measure a colonial “fathom” you would:

a. stretch out your arms
b. stand on tiptoes
c. stack items waist high
d. group by six

The name derives from the Old English word “fæðm,” corresponding to the old Frisian word “fadem” meaning embracing arms or a pair of outstretched arms.

2. “Stroudwater” is a type of cloth used for:

Stroud was an English cloth town known for its involvement in the Industrial Revolution; woollen mills were powered by the small rivers which surge through the land’s five valleys. Particularly noteworthy was the production of military uniforms “in the colour Stroudwater Scarlet” (Red Coats!)

A “skipple” was an anglicized form of the Dutch word “schepel” which was equal to three pecks, (two gallons per peck).

a. chiefs
b. squaws
c. warriors
d. all of the above

Some accounts simply describe what has come to be known as a matchcoat, rather than calling it by name. The naturalist Peter Kalm (who traveled extensively through colonial America) includes in his listing of Goods Sold to the Natives by the French:  “Pieces of white cloth, or of a coarse uncut material. The Indians constantly wear such a cloth, wrapping it round their bodies. Sometimes they hang it over their shoulders; in warm weather they fasten the pieces round the middle; and in cold weather they put them over the head. Both their men and women wear these pieces of cloth, which have commonly several blue or red stripes on the edge” (Peter Kalm; Peter Kalm’s Travels in North America; the English Version of 1770; Dover Publications, NY 1987; p. 519).

5. Which of these photos show colonial tobacco tongs?

Historians suspect this tool had multiple functions, not the least of which was its use as a flint striker to spark that necessary ember. Indeed, the larger mass of the lower part does suggests a striker. It’s easy to understand the tong function, and the turned-up and rounded end of the upper handle definitely looks like it could be used as a tamper. As every pipe smoker knows, you need a tamper (or as they called them in the 1600’s,”stoppers”). Lastly, the larger, rounded paddle end of the lower handle looks like it could be used as a reamer, to clean clay pipe bowls smoked during that time.

The item described is A, tobacco tongs. B and D are both colonial medical forceps — B for surgical, D for dental use. C are ice tongs that might’ve been used when the Schuylkill supported a thriving ice industry.

6. Gimblet — a smaller version of which hand tool:

A gimlet/gimblet is a hand tool for drilling small holes, mainly in wood, without splitting. A gimlet is always a small tool — a similar tool of larger size is called an auger. The cutting action of the gimlet is slightly different from an auger, however, as the end of the screw is smaller (and so is the initial hole it makes).

7. A “jew’s harp” is a folk instrument so named because:

a. the shape resembles Hebrew lettering
b. it was used in medieval Jewish canticles
c. Jewish merchants likely imported them from Asia
d. none of the above

The Jew’s Harp or Jaw Harp is a small musical instrument held between the player’s teeth or against the lips and plucked with one or more fingers. Believed to be native to Asia and Oceania (except for Australia). Aside from some tribes of Alaskan Innuits, no evidence (so far) suggests this instrument existed in North and South America or Africa prior to its introduction by European traders, presumably by way of Jewish merchants from the East.

Jew’s Harps were often part of land transactions with Native Americans — as far back as 1593 in South America.  Archaeologists have found 17th- and 18th-century Jew’s Harps among native artifacts from Maine to Florida. Wear and condition  indicate that they were actually used, and not just proffered as currency.

Must be some sweet-sounding instrument, to be so universally valued and enjoyed, right? Take a listen, see what you think.

8. Estimated distance “as far as a man can ride in two days with a horse“

William Penn  and his agents made at least seventeen purchases from Native Americans living near the lower Delaware River. Some of these purchases included “Walking Clauses” for tracts of land running far back into the country:  two days’ travel by horse, as far as a man could go in a day and a half or two days.  In at least one instance Penn had the land measured; the man’s two-day travel, specified in a 1685 deed, was surveyed three years later as a line from Philadelphia to the Susquehanna, a distance of about seventy miles.

9. Red lead was used in the production of:

A recent exhibition of Southeastern PA furniture from 1725 – 1850 featured an extraordinary kitchen cupboard from Berks County, PA. The paint was so pristine that it almost seemed too good to be true, but a thorough scientific study determined that its brilliant decoration was indeed original and the vibrant palette was identified as a red lead ground with vermilion decoration.

10. “Wampum” is a type of Native American currency made up of strings of polished:

The word “Wampum” comes from the Narragansett word for “white shell beads.” Wampum are made in two colors: white from the whelk shell, and purple-black from the growth rings of the quahog shell. At Penn’s time, a fathom (six feet of strung beads) of white wampum was worth about ten shillings —  double that for purple. With the scarcity of metal coins in New England, Wampum quickly evolved into a formal currency after European/Native contact, it’s production greatly facilitated by slender European metal drill bits.

BONUS QUESTION. Give yourself a hand if you know what’s a hand of tobacco:

a. a pound of raw leaves and stems by weight
b. a jar of dried, ground snuff
c. live transplants approximately 4 inches tall
d. about a dozen cured leaves

A grower ties cured weed into fan-shaped “hands,” a dozen or so leaves with their stems tied together. He places the hands carefully flat, spreads them evenly, then applies heavy pressure — enough to squeeze them into their casks for sale. The tobacconist unties these hands, and cuts out the central rib or stem from each leaf. He puts the stems aside to grind into the cheapest snuff he made, and sorts the leaves by size/grade according to their intended use.

How well did you do? For more fun with Historical Trivia, consider adding History.net’s daily history question to your mailing list, and learn something new every day!