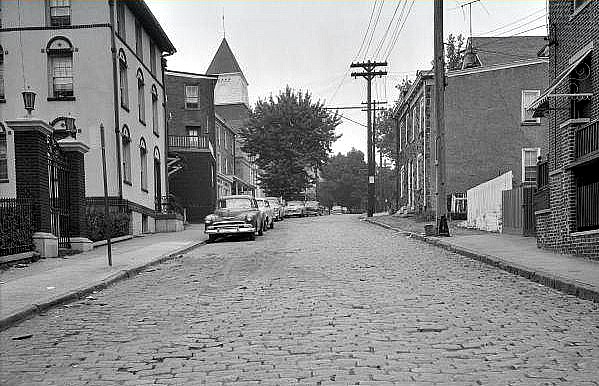 We sometimes get too focused on Hohenadel House and forget that Indian Queen Lane is probably the single most architecturally diverse street in East Falls, if not Philadelphia, with Gothic, Greek Revival, Federal, and Italianate houses interspersed among classic rowhomes.

It’s one of the oldest roads in Pennsylvania, first appearing on maps in 1692 when it was the main trail from the Falls of Schuylkill to Philadelphia. This former Native American path wound up from the river and past what is now the Queen Lane Reservoir.

The Indian Queen Lane of today is only a fraction of its former self. A small lane close to the river in the lower Falls; the old highway to Philly is now chopped up into Queen Lane, Abbotsford, and Germantown Avenues.

No matter. The tiny stretch of road that remains still offers plenty of history and unique buildings. Falls of Schuylkill Baptist Church (Next to 3625 Indian Queen Lane)

Formally constituted in 1838, the foundation for the Falls Baptist Church building was laid in 1851. Prior to that time, the congregation met in private homes and at the Old Academy farther uphill. Before the church was built, a number of baptisms took place in the Schuylkill River and in Mifflin Run. Built as the parsonage for the Baptist Church next door, the first two stories were built in 1850 in the Italianate style of Victorian architecture. The third story, with its mansard roof, (characteristic of a Second Empire style) was added in the 1880s/90s.

The Second Empire roofline was favored by remodelers because it allowed a full usable story of attic space. Although the Second Empire style originated in France during the reign of Napoleon III (1852-70, during France’s Second Empire), it didn’t appear in America until the Grant administration and was therefore facetiously called the General Grant style. Plush Hill (directly across the street from 3617 Indian Queen Lane)

The house across from Hohenadel House (3666 Haywood Road, at the intersection of Indian Queen Lane and Haywood) is unremarkable, but the ground it occupies was once part of a grand estate.

Plush Hill was the 18th century home of William Smith. The first Provost of the University of Pennsylvania, Smith built a mansion and two other residences (known as the “Octagon” and the “Hexagon”) beginning in the 1730s. Owing to the many renovations over the years and the strange shape of the Octagon and Hexagon, the estate came to be known as “Smith’s Folly.”

The Hexagon was situated closest to Indian Queen Lane, just above the still-standing stone wall. The grounds were entered from Indian Queen Lane by a drive which was probably where Haywood Street intersects with Indian Queen Lane today. The property changed hands several times after Smith’s death and its most notable owner was John Dobson, of the famous Dobson Mills.

This house was built for Charles F. Abbott, a major real estate developer in the East Falls area, by Amos Ellis, a brickmaker from the Spring Garden section of Philadelphia. The architectural style is Italianate with several characteristic features, including a low pitched roof, wide overhanging eaves, decorative brackets, and narrow arched windows (at least on the second floor. Unfortunately, the first-floor windows have been replaced in recent decades). An Italian villa by Samuel Sloan. The facade, particularly the gables on either side and the elongated Palladian window above the entrance, are reminiscent of the Hohenadel House.

The house may have been influenced by one of Philadelphia’s best-known architects, Samuel Sloan. Although there is no indication Sloan was the architect of the Hohenadel house, he certainly designed a villa for Abbott in the 1850s. The Abbott Villa once stood on the current site of the Queen Lane Reservoir. These six homes are recognizable as classic Philadelphia row homes. 3602 was the model home for this series of homes, and, along with the East Falls Methodist Episcopal Church and a café that once stood at the corner of Krail and Indian Queen Lane (current site of Fiorino’s restaurant), was featured in the 2007 movie, “Cover,” with Lou Gossett, Jr. and Patti LaBelle. East Falls Methodist Episcopal Church, built in the Greek Revival and Italianate architectural styles. The church originated in a class meeting in 1837 at the home of Andrew Gilmore on Ridge Avenue.  Like most churches in the Falls, it temporarily held its services in the Old Academy building. In 1871, the corner lot on which the church now stands was purchased for $1875 from Alexander Krail, a coal merchant.

When the shrinking congregation closed its doors in 2006, the church seemed likely to remain a vacant memento of East Falls’ past. Fortunately, Val Nehez converted the first floor into an open-office work space for freelancers and small businesses. The church’s unaltered upper floor is still available for lease. Although the building was constructed about 20 years before the Gothic Revival style of architecture became popular in America, it does have Gothic details. The centered gable with decorated vergeboards (in red), the window extending into that gable, and the full width porch are characteristic of the style.

Now part of the Old Academy Players complex. The Carfax building was the home of the ‘Young Men’s Association’ for many years. In 1971, it was offered to the Old Academy Players for a nominal sum upon the dissolution of the Association. The play ‘Dracula’ was being performed at that time, and one of the lines was “that old ruin Carfax”, the name of Dracula’s residence. When it was said, the actor always pointed to the building next door. So, as an indication of its condition at the time, it was affectionately named ‘Carfax’. The “Old Academy”, was built in the Federal Style with a belvedere observatory. Over the years, it has served as a school house, meeting hall, the public library, and the starting place for just about every church in the area, until they eventually found permanent homes.

The Old Academy Players was formed in 1923 as the Moment Musical Club by 19 members of the Falls Methodist Church. They acquired the use of the Old Academy in 1932, converting it into a theater. The stage was at floor level and all entrances and exits had to be made through the front door and down the aisle. In 1941, through the generosity of John Hohenadel, a local brewer, and John B. Kelly a much needed addition to the rear of the building was constructed. Soon after that, a young girl named Grace Kelly made her debut on the stage. Another famous, though lesser-known actor, Robert Prosky, also acted at Old Academy. Between the years of 1947 and 1955, he appeared in ten Old Academy productions. People most often recognize him as Sgt. Jablonski from the television show Hill Street Blues or as Robin Williams’ boss in the movie Mrs. Doubtfire. Now the site of condominiums, this ground once housed the John Hohenadel Brewery from 1875-1953. The brewery began producing less than 1,000 barrels, but in the years leading up to prohibition, output exploded with production approaching just under 30,000 barrels. Brands included Indian Queen Ale, Rival Porter, Alt Pilsner, Trilby Export, Hohen-Adel-Brau and Health Beer.

Unlike his father who died three years after moving his brewery to this location, this John Hohenadel enjoyed health & prosperity, becoming president of the Bank of East Falls and then opening another Höhenadel Hotel before leaving IQL in 1937 for a landscaped estate near Schoolhouse and Henry (now Timmons House on Penn Charter’s campus). So that’s a glimpse of our own wonderful Indian Queen Lane. If you love history and architecture, grab your shoes and take a walk!

7 thoughts on “Walking history: A Tour of Indian Queen Lane”