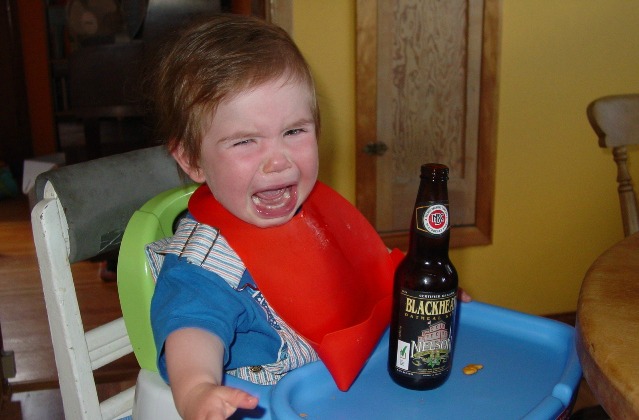 The pilot batch tasting is this Saturday! After a couple weeks in Tom’s basement, we’re ready to sample the Maibock beer he made last month, to see if cluster hops produce the desired citrusy flavor (which can also, in certain beers, have hints of tropical fruit essences).

Tom’s also hoping for a light and crisp body, but at this early stage of the game, the primary goal is to just “avoid beer that tastes like the first Rheingold you had with your father.” (We didn’t have Rheingold in our house growing up, but I’m sure the bitter beer face we made on our first sip is pretty universal.)

Tom’s first step will be to get the “green” (i.e. young) beer off of the yeast cake (a two-inch layer of yeast-rich sediment that’s formed at the bottom of the carboys). Using a process called racking, Tom will siphon the beer from the carboys into a secondary container. He’ll then taste that beer to determine “how it tastes hop-wise.” If he gets Rheingold flashbacks, he’ll try brewing again using Northern Brewer (NB) hops.

Although NB is a classic hop, it has a minty taste that’s challenging for use in a lager beer. It’s a great ingredient for Amber beers, complimenting their caramely flavor, but a lager requires a more astringent flavor profile from the hops. “With Northern Brewer, you run the risk of having a lager taste similar to mint on marshmallows,” said Tom.

Naturally, he’d prefer it if the cluster hops batch works out, but, if he has to resort to NB, he does have a trick or two up his sleeve. The key in that case, he said, is to adjust your hop schedule. The timing and rate at which he’ll introduce the NB hops into the boiling wort will “minimize their mintiness, while still allowing the Hallertau and Tettnang hops to produce their fullest flavor.”

Regardless of whether he uses cluster or NB, Tom will use the yeast cake from the carboys as the basis for the final Hohenadel batch. His next step is to continue coaxing the yeast to grow by sealing it in the carboys for a couple days. This will allow the yeast cells to multiply. Tom is seeking to produce as many cells as possible because “the more yeast cells you have, the better your beer.”

Prepping for the final brew

Tom is working out the calculations and ingredients for brewing the Hohenadel lager. In keeping with the practices of brewers in the 19th century, he’ll be adding corn flakes directly on top of the mash. (No not Kellogg’s. Flaked corn is a corn kernel that’s been pressed and steamed. It’s similar to how oats are turned into flakes for oatmeal.) The flakes will produce a beer with a mild, less malty flavor and body than an all-malt beer. They also produce a drier, more crisp beer.

Tom has also obtained 2-row malting barley from Farmhouse Malt in New York state. (2-row refers to the configuration of the seeds on the barley stalk.) What makes this barley unusual is that it comes from one farm and, even more important for Tom, “you can actually talk to the farmer who grew it in Rome, New York.”

I’ll be meeting with Tom on Monday July 14th at 9:30 AM to begin brewing our final batch. We may be joined by Lou Farrell, a noted beer expert and former brewmaster at the Dock Street Brewpub in Philadelphia, where he formulated and manufactured more than 40 types of beer. One thought on “Pilot Batch, Part 2: Avoiding the curse of “Dad’s beer””