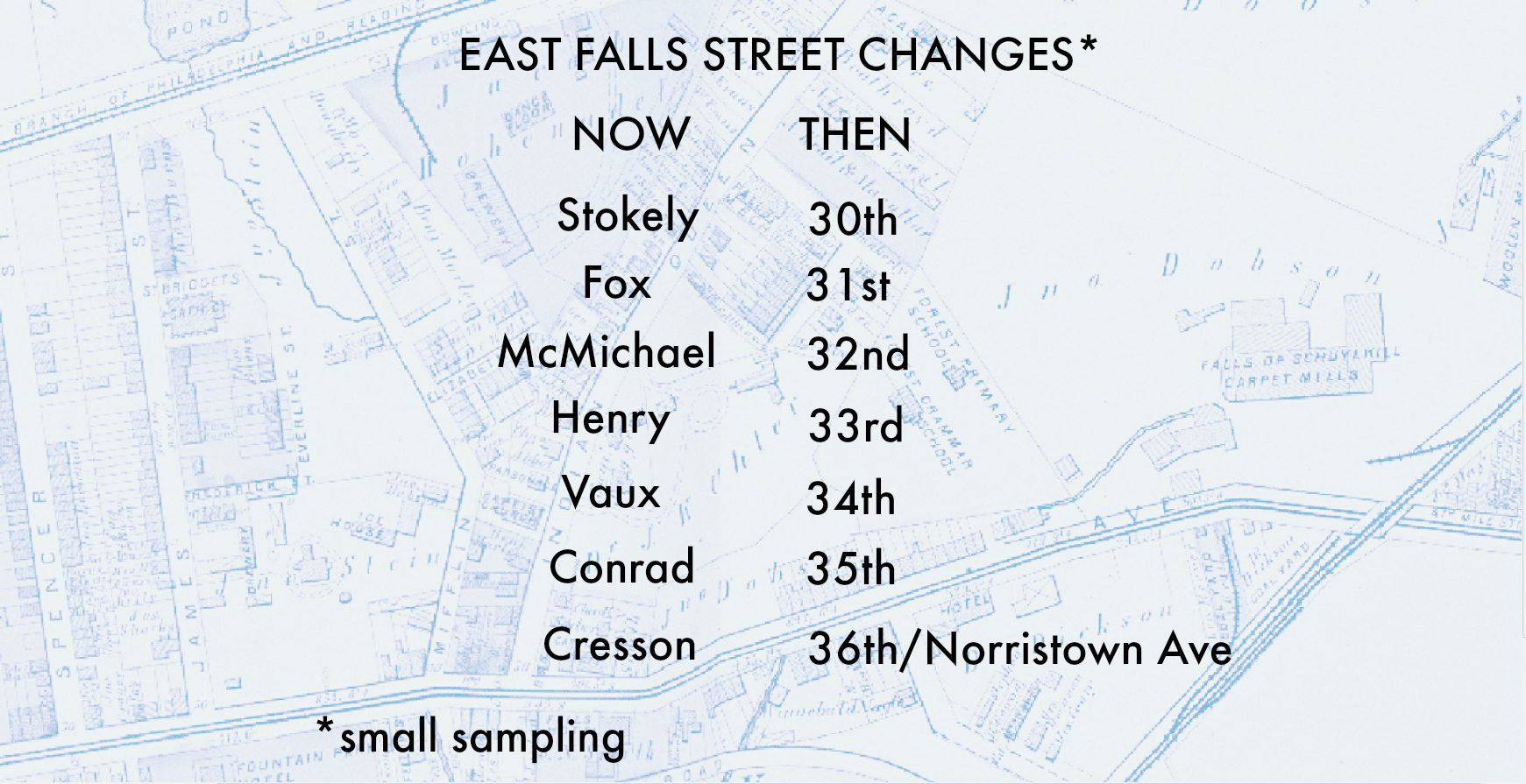 Tony Gallagher asks a deceptively simple question about when some of the streets in East Falls were renamed.

Loved your article on East Falls street names. One question I’ve always had, what year were the street names changed? I’m a fourth generation Fallser and when I lived on Division St. my mother, who was born in 1908, always referred to Conrad St. as 35th St., Vaux St., as 34th St. and Henry as 33rd. St.

The Ward maps on www.historicmapworks.com show an 1884 East Falls map with numeric street names, but a 1888 map includes the names of the mayor’s with the numeric names in parentheses. Names must have been changed sometime between 1884 and 1888. Since my mother was born in 1908, she must have been repeating what she learned from her parents. Her father, Frank McDermott, was born in 1875 in the falls. His father, John McDermott, immigrated to the US in 1872, lived on Sunnyside Ave. and worked in Dobson’s mills.

Would love a definitive answer.

Yes a lot of our streets did switch names (some rather recently, too). The “when” for the streets you mentioned can be tracked down — sort of — with maps like the ones you found on www.historicmapworks.com. Fantastic resource, by the way. Thanks for the tip, we’d been using the maps on Philageohistory.org, which has those “layered” maps that are fun to zoom though but kinda limited. Anyway:

You may be right about the 1884-1888 time frame for those numbered street changes you were wondering about. Get this, though: there are Bromley maps showing the new street names in 1888, but the Baist Atlases from that very same year include the numbered streets only.

So whenever the “official decree” came down to change our local street names, it looks like the actual re-naming most likely was a gradual thing. Which makes sense: neighborhoods have memories, after all. Your mom likely grew up repeating street names her parents used — and then as new families moved in, they learned the street by its new name so that by the time you grew up, the “new” names were the accepted ones.

So now we know “how” streets change names. And have narrowed down the “when.” But what about the “why” ?

As part of the Philadelphia Consolidation Act of 1854, the Falls of Schuylkill and other outlying areas became part of the city of Philadelphia, kicking off what must’ve been a spectacular amount of paperwork, including all new maps. One of the first issues at hand when incorporating these new municipalities into Greater Philadelphia was creating consistent street names throughout.

Cause street names — the really old ones — tend to vary wildly from one settlement to the next.  More than likely, a stretch of road takes on the name of whoever lives there or a great big tree nearby or for the curves/woods/river/etc they wind around. And these names tend to exist only in a very small area, and then a little farther up the road there’s another guy (or tree or road anomaly etc.) who becomes associated with that part of the highway… And so on, from each little village to the next.

These villages grow to towns, like the Falls of Schuylkill, and when a big city, like Philadelphia, has to assimilate them into their established street structure, it can get kinda messy. Common nouns, proper names and even numbers over such similar areas tend to repeat — and you simply can’t have multiple streets in a growing city sharing the same name. Way too confusing. Post men and taxi drivers will revolt!   Someone’s gotta change their street names, and you can bet it’s not going to be the big city folks.

He notes that from 1854 until the close of the 19th century, the Philadelphia City Council renamed hundreds of city streets:

The problem of consolidating this many self-governing areas was that a large number of continuous roadways had acquired different names as they passed from one area to another. To achieve some degree of order, the city legislated the renaming of streets in 1858, which resulted in the changing of hundreds of names.

In 1895, the city again renamed hundreds of streets, with some going back to their original names and others assuming brand-new ones. Two years later, corrective measures were legislated to return historic names to their proper place in Philadelphia history.

Sounds like the Philly government we all know and love, right? One example of the name redundancy problem concerns our own McMichael Street, or should we say streets, because there are two (and they’re more like loops but whatever). One McMichael, from Queen Lane to Coulter, surrounds McMichael Park. There’s another McMichael, however, less than a mile away on the other side of Queen Lane reservoir. Not confusing at all. Thanks for your interest — and your insights. Give us a holler if you feel a guest post coming on. EastFallsHouse.com is a community project, we welcome questions, corrections, or anything, really, that adds to a better understanding of our East Falls memories and stories.

Meanwhile, we’ll keep on researching the street names. If we uncover any definitive dates attached to specific name changes, we’ll post an update.

3 thoughts on “When were streets renamed? Fourth-generation Fallser writes in”