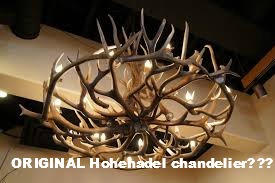 We’ve tracked down photos of the original chandelier that once hung in Hohenadel House’s dining room. Ha! That antler one is NOT it — this crystal one (above) is.

An interesting development in the house’s decorating options, for sure. What a coincidence, too, the same weekend they discovered the house’s original window furnishings (more on that below).

And yet another piece of Hohenadel House’s history has turned up recently — more Hohenadelers!

We’ve been contacted by the Greene family who lived in the house after the Ponzeks moved out. We’re emailing Siobhan, one of the three daughters (there was also a son). She lives in Maryland now — her mother is still in East Falls, though, so we’re of course working on getting them out here to share their stories. Meanwhile, she writes:

“I have a lot of memories, teen parties in the basement, an armoire on the 3rd floor that was too large to move to my room on the 2nd floor…I was crushed…the ‘real’ carriage house that was destroyed in a fire…the hutch in the kitchen and I had to smile when I saw the green linoleum…”

Check it out, looks like it’s just loosely-packed dirt under the stairs where Lawrence said an old passage used to lead to the caves down the street (we think he means Arnold –formerly “Hohenadel”). In addition, there seems to be some kinda space behind the wall panels on either side of the basement fireplace. Another passage? A secret room?

Who knows what’ll turn up, as construction continues and new corners are explored.  This house seems to have surprises at every nook. Speaking of: on a whim (and a few glasses of wine) this past Saturday night, Sean and Felicite decided to check their big old windows with the hinges painted over. Back when we had the privy diggers out here, local historian Walt Waholek suggested the panes could’ve been stuffed with newspapers or old clothing used for insulation. Maybe there’d be antique brass buttons or something neat to find?

Oh there was something neat alright. No buttons or papers but they found the house’s original shutters. Most likely over 200 years old. They just opened up two windows, and the difference in each room is startling. The windows seem immense now, and the dark wood brings a warm, solid energy. Wondering now if either the Ponzeks or the Greenes knew they were there.

You know who most likely didn’t know they were there? Their contractor, Mike Labetti, who will be positively thrilled to add “refinish over a dozen giant antique shutters” to his To – Do list. Along with rip up all the windows they’ve already painted. Which is all but two of ’em, d’oh.

But you can’t find old original features like that and just cover ’em up again, right? Those shutters are a part of the house, it feels wrong to seal them away for another home owner to discover.

In addition to the house’s unique secrets, Sean and Felicite are designing their own surprises, including a hallway powder room hidden behind a full-length mirror and a door disguised as a bookcase at the entrance to their attic stairs. They’re also committed to restyling all their old contemporary furniture to include lots of eBayed/CraigsListed antiques. We get more psyched about this project every time we talk to Sean and Felicite!

Their vision for Hohenadel House reminds us of another restored East Coast mansion, this one in Washington DC:  The O Mansion. Located on O Street right off DuPont Circle (the city’s downtown), O Mansion is actually five inter-connected townhouses, re-designed into one home by US Capitol architect Edward Clark, and eventually purchased in 1980 by an amazing character of a woman who created the incredible museum/hotel/creative vortex it is today.

Open to the public for brunch, afternoon tea, treasure hunts, happy hours and the occasional holiday fete. They also have a yearly flea market, although technically every day at O Mansion is a flea market: everything is for sale. All the art, furniture, decoration — literally everything. Most of it has been tagged with charming hand-written tags, but one of the owner’s rules is that if you really love something — if an object “speaks” to you in an authentically artistic way, then O Mansion will let you have it.

Not for free, of course. The owner is eccentric, not crazy. But she’s serious about working out an interest-free payment plan to make sure that if you truly fall in love with one of O Mansion’s treasures, you should be able to take it home.  Sometimes, art just speaks to you. Gotta respect that.

In a similar vein… Hohenadel House has been speaking:  to Sean and Felicite, it’s been promising surprises and totally delivering.

To us, we’ve found a torrent of fascinating history from waaaaay back when the land was an English settlement, all the way up to the 80’s when interesting folks like the Ponzeks and the Greenes lived and grew up here…

Who else has Hohenadel House been speaking to?

We suspect it’s been calling  Lawrence and Siobhan, and a few neighbors from the old days, including Kellie Flanagan Carroll, who lived next door from 1978 – 2003. She helped put us in touch with the Greenes, and her words here sum up how much of an impression Hohenadel House has left, even after all this time:

“I have many fond memories of that house. I grew up playing in every part of that mansion. I grew up with the kids that lived there for a few years. My heart is happy knowing that this is happening!! Thank you! Sometimes when I can’t sleep I will take a memory tour of the house in my head….sooo many sleepovers and great times there. The beautiful wrap around porch — and the stonework around all the grounds. The wall — soooo amazing. Like a castle. The backyard was amazing also. The elevator in the kitchen. The stain glass in the bathroom. I could go on and on. I still remember the night the ‘carriage house’ burnt down. I spent a good amount of time myself over the years looking for souvenirs from Hohenadal brewery —  I spent some time hanging out in there as a teen for sure.”

We’ve heard quite a few stories about “epic” parties in the house’s basement. Unfortunately for Sean and Felicite’s kids, the basement will be a wine cellar for adults, not a rec room for teenagers.

Oh well. Maybe this’ll inspire them to dig out the caves again!