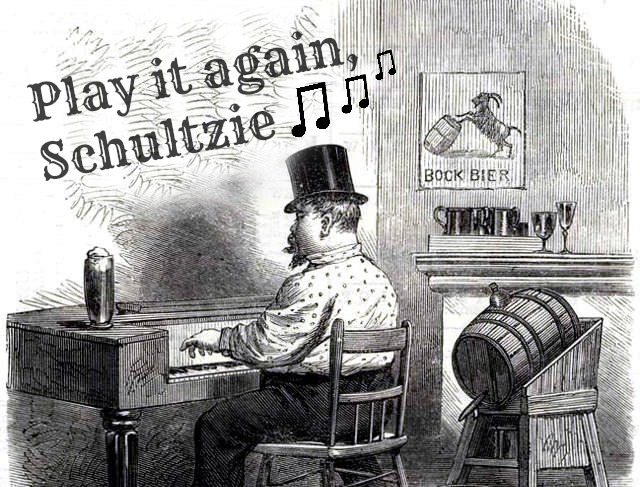 Pity the beer snobs who don’t “get” lager. They think of an entire style of beer as something that comes in 12 packs of aluminum cans with mountains on the label. It’s thin, it’s watery, and it doesn’t punch you in the face with a fistful of hops. For them, ales are where it’s at and always will be. No matter how silly…

Funny thing — ales were once the hip beer in the early 19th century, until a bunch of German immigrants came along with an idea to make lager in America. Although they wanted to recreate the lager of their homeland, these Germans wound up instead making a unique American beer that knocked ale off its perch as America’s favorite beer. In hindsight, this beer has come to be called the “pre-Prohibition” lager.

And when it came to flavor, this lager was no “head for the mountains” lightweight. It was as robust as a Märzen, with the hops of a Bohemian Pilsener, and edges that were rounded by a grainy sweetness imparted by corn. It wasn’t the stuff that came out of a beer wagon pulled by 12 Clydesdale horses (or out of the horses either).

This lager revolution began in the 1840s, when German immigrant brewers realized that, for practical & economical reasons, they needed to use American ingredients rather than those familiar to them from Germany.

It wasn’t an easy fit, there were issues. In particular, the six-row American barley was much higher in protein than its two-row Bavarian cousin, which clouded the beer and added harsh flavors. American hops, at that time were also coarser in flavor.

Brewers soon discovered that the distinct sweetness of corn could blunt the American barley’s unpleasant sharpness, and produce a clearer beer. They also combined imported German aroma hops (i.e. “noble hops” like Hallertau, Tettnanger, and Saaz) with domestic bittering hops (such as the so-called Cluster). The result was a flavorful Pilsner-style beer. By the 1870’s, lager had relegated the ales and porters to specialty status.

Prohibition put most of the nation’s breweries out of business in the 1920s, idling a generation of brewers skilled in the still-developing lager style. By the time prohibition was repealed 13 years later, these skilled brewers had moved on and only the largest breweries were able to produce beer.

Worse yet, the scarcity of barley, hops, and corn, brought about by Great Depression and World War II, meant that the bottom line, not brewing ingenuity or dedication to craft, would decide the “post-repeal” flavor of lager. More beer made from fewer  (and lower quality) ingredients became the most profitable approach.

It also didn’t hurt that there was a thirsty population that hadn’t had a drink in almost 14 years and would settle for beer of any kind. Given that landscape, weak beer was inevitable. Back to the future

With the introduction of beers from microbreweries such as Lucky Bucket, Victory, and Full Sail, there’s a revival of the type of lager our forefathers drank and a focus on experimentation with quality ingredients that have been lost in the “post-repeal” era.

The revival may not ever register with the beer snobs who favor hops and alcohol content above all, but the true lager style has always been a favorite of veteran brewers like Lou Farrell, former head brewer of Dock Street Brewpub.

His favorite beer to brew is a pilsner, because “It’s a tough beer. You can’t hide your mistakes. Everything shows in a pilsner.” Imagine that, true lager requires skill to make!

I guess we’ll find out just how good a lager can be this October when the final product of the Hohenadel Beer Project is unveiled. We’re betting this pre-Prohibition lager will be a hit with true craft beer fans and people who are tired of the weak mass-produced dishwater that passes for lager.

2 thoughts on “Pre-Prohibition Lager: Why it left and why it’s back”