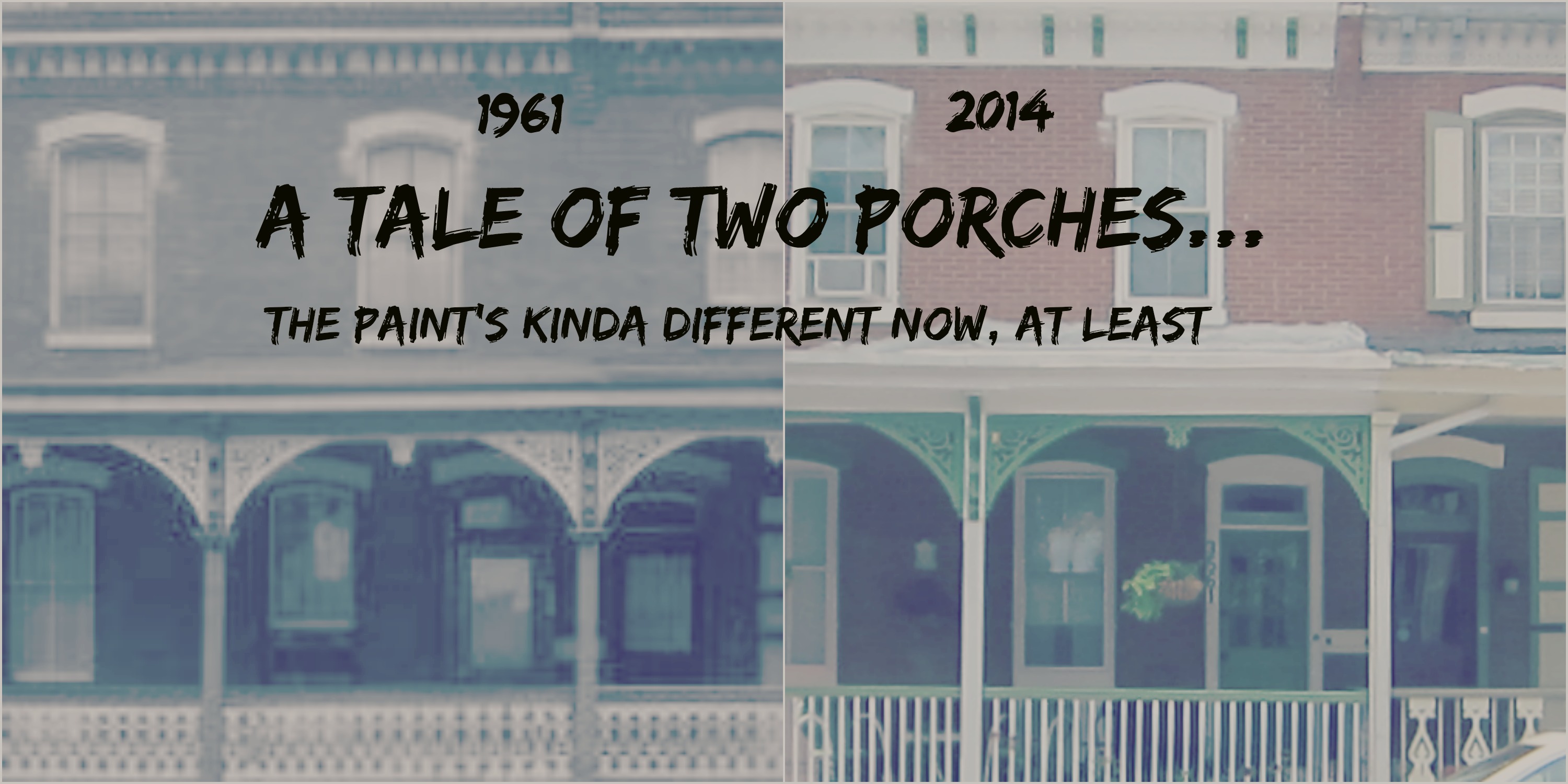 Indian Queen Lane and Krail — right up the road from Hohenadel House.

You’d hardly know the difference 53 years makes. What’s up with that, East Falls?

Last week, we stumbled on a cache of East Falls photos from all the way back to the early 1900’s; this week, we took comparison pics.

You’d think over a hundred years would’ve radically changed our streets and parks but, well…. See for yourself. The library, below:  So that’s what 100+ years of tree growth looks like! Next, some photos of the same spot of the Wisssahickon where local author Andrew Mark Herman says there’s been a crossing over the creek since 1790. Now there are two:

The enormous Henry Avenue bridge, built in 1927 for a growing community, spans the whole valley to accommodate automobile traffic and public transportation.

And the much-older Hermit Lane bridge, which is barely more than a footpath just a few feet above the water (bet those canoers had to duck!). Monkish and kinda kooky, he and his followers occupied caves (!) along a path up the hill from this bridge. They founded the Tabernacle of the Mystic Brotherhood aka Society of the Women in the Wilderness (same diff), who believed they could escape death and decay by transforming into the spiritual world.

You think that’s batty? Well real live people living today will have you believe they sneaked down into the Hermit Caves, summoned the powers of Kelpius (which sounds like humming, btw), and DEFLECTED THEM TO A PIECE OF JEWELRY you can buy for $777.77.

Others say the Hermits were Doomsday worshipers, possibly the Satanic kind.  And legend has it they turned ordinary objects into gold in those caves, too.

Whatever they were up to, this lovely stone bridge is named for them. Originally the old Township Line Road separating Germantown & Roxborough townships, Wissahickon Ave was built in 1826 along the banks of its namesake creek. “Wissahickon” is a corruption of the Lenni Lenape “wisameckham” which means “catfish stream.”

In 1983, the section from Forbidden Drive to Ridge Ave was renamed “Lincoln Drive.” Springs Memorial Fountain is still visible on the roadway, but it’s been a lonnnnng time since this public drinking fountain has quenched the thirst of weary highway travelers. This Greek Revival-style marble facade from the late 1800’s once had fountains on either end for humans, and a large central trough for horses (as shown).

Natural springs are found all along the Wisssahickon, and such public “watering holes” were not uncommon — this one near the Hermit/Henry Ave bridges bears the name William Leonidas Springs, the son of prominent North Carolina planters, personally bestowed their land by King George.

Poor aptly-named Mr. Springs! His fountain (as well as all of the other spring-fed public spigots in the Wissahickon) has long been sealed and closed due to pollution, probably sometime in the 1940’s.  The pull-off is still there, though. Wissahickon Hall to the right, below, on Lincoln Drive at Gypsy Lane. Built by Charles Lippen in 1849, the hall first served as a boarding house and then a became a tavern famous for catfish and waffles.  This area between the creek and the river was a popular resort destination from the 1800s to the early 1900’s. It was also the scene of some pretty serious local rivalry:

Wissahickon Hall was the first stop along the highway from Philly, and it was known for great food & entertainment. Up the way a bit on the west bank of the creek was the Log Cabin, which wasn’t nearly as good, so the owner tried to lure customers with a roadside zoo featuring owls, foxes, monkeys and other small animals. Two large black bears were chained to an old passenger coach near the door.

It worked! But then, the Maple Springs Hotel across the street from Wissahickon Hall got their own two bears, and these bears were trained to chug bottled mineral water, so of course all the customers flocked there to watch.

And then the Park Commissioners got sick of all the brouhaha so they started blocking resort permits and eventually all but the Valley Green disappeared. Whaddaya think? Has East Falls changed as much as you expected? 2 thoughts on “East Falls Retrospective: THEN & NOW Pics Around Town”