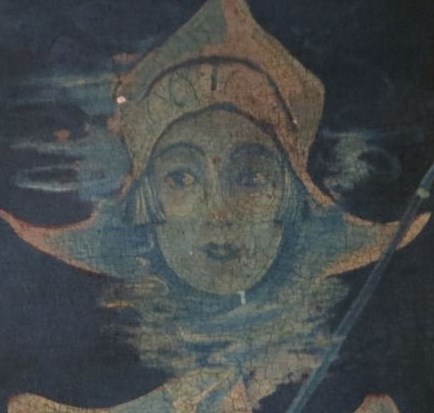 Germany doesn’t corner the market on “Hohenadels” — that’s a Dutch name, as well. But there’s no disputing that John William Hohenadel, owner of Falls Brewery and likely past resident of the East Falls house, was German.

So we’re kinda scratching our heads over these lovely-creepy murals uncovered in the house’s basement: These murals look Dutch to us. The photos above were just quickie snaps, we’ll be updating soon with full-sized images that better show age, size, color and some context in the room, if possible. But you get the idea: wooden shoes, pointy hats… even that sail boat kinda seems Dutch, considering the country’s rich maritime history (the “Golden Age” of merchant shipping, and all).

But what are Dutch murals doing in a German house?

The house was originally built for Charles Dobson of Dobson Mills, whose family hailed from Oldham, England. So….

What do you think? How would you try to unravel this mystery?

Throw down your comments & suggestions below, and stop back for more updates as we dig deeper.

UPDATE!  Word on the streets — actually, from an old folks home in the area — indicates there was once a grand bar in the house’s basement. We’re thinking these images were likely part of the design somehow.

2 thoughts on “What’s Up With These Dutch Murals in a German House?”