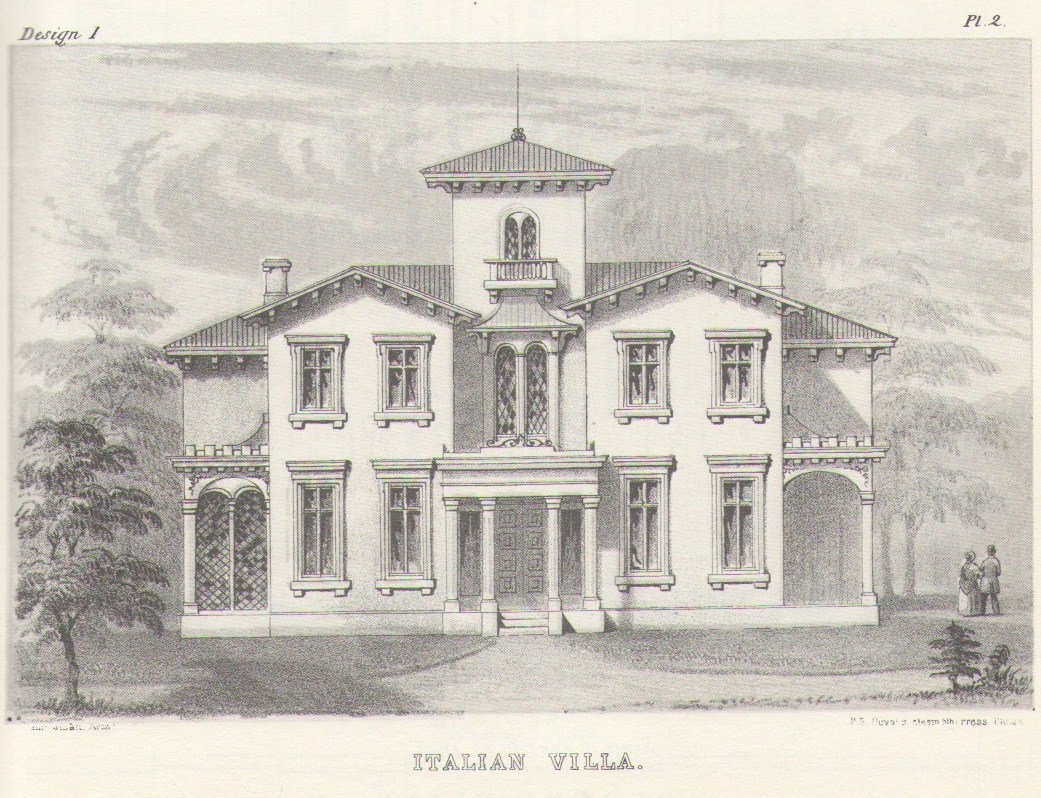 An Italian villa by Samuel Sloan (shown above). Elements of the facade, particularly the gables on either side and the Palladian window above the entrance, are reminiscent of Hohenadel House.

Who built this place?   It’s the first question anyone asks about an old house they can’t seem to ignore. And Hohenadel is a place that demands attention. Walking our dog through East Falls, we’ve often looked up at the ravaged walls and wondered about the architect of such a grand mess.

As we dig into Hohenadel’s history, though, it may be the wrong question.

There may not have been an an architect at all. Perhaps a builder, or the property owner, created the place from scratch. Maybe a combination of skilled laborers drawing on experience, not plans, built Hohenadel House.

If there were plans, they may have been drawn (or influenced) by Samuel Sloan, an extremely popular architect in Philadelphia during the mid 19th century. Sloan designed dozens of residences — many of them terrace houses and villas in the newly developed suburbs in Philadelphia’s western and northern reaches.

In fact, Sloan did design at least two houses in East Falls during 1852-1853. The first, Abbott Villa, was designed for Charles F. Abbot, who was also listed as the owner of the Hohenadel property at the time.  The villa was an exact copy of a palatial villa on the grounds of Bartram’s Gardens, built for railroad magnate Andrew Eastwick. The Abbott Villa was demolished sometime prior to 1930 when the Women’s Medical College was built. (The site is now occupied by the Drexel University College of Medicine.)

Another villa was Bella Vista, which Sloan built for the Reverend John M. Richards of the First Baptist Church of Germantown. The Norman villa, which once stood on Indian Queen Lane (probably near Cresson), featured an octagonal entrance tower 100 feet high.

Admittedly, two Sloan buildings in the vicinity of Hohenadel House are meaningful, but tenuous, clues. What about Hohenadel House itself? Does it show traces of Sloan’s influence?

In his book, The Model Architect, Sloan mentions several features of an Italian Villa that are evident in Hohenadel:

Located near Ridge Avenue, the house

“…possesses very little of the rural character, and seems much more appropriate for…one accustomed to city life, than for one born and bred in the country. Its location, consequently, should not be in the depths of the forest, but near some frequented highway within a few miles of the city.”

The gables along the roofline

“…give symmetry to the front and…take away that monotony and rigid uniformity , which is likely to result from a nearly rectangular ground plan, and which above all things is to be avoided in country houses.”

The flatness of the roof and the large eave brackets along the cornice line are also characteristic of Sloan’s designs. The hooded windows, seen on the second story, also suggest Sloan’s influence. There is plenty of room for doubt about who built this place — largely because of the changes that have been made to it over the years. Most obvious is the addition of a third floor, which doesn’t appear in the earliest known photo of Hohenadel House. The additional story has dramatically altered the original structure.

Note how the “Palladian” window/door (just above the front entrance) is out of alignment with the other two windows that flank it. Other changes are also obvious, such as the first floor windows, which seem more like Sears than Sloan.

These inconsistencies are why we noticed Hohenadel in the first place — and why we keep digging into its past.