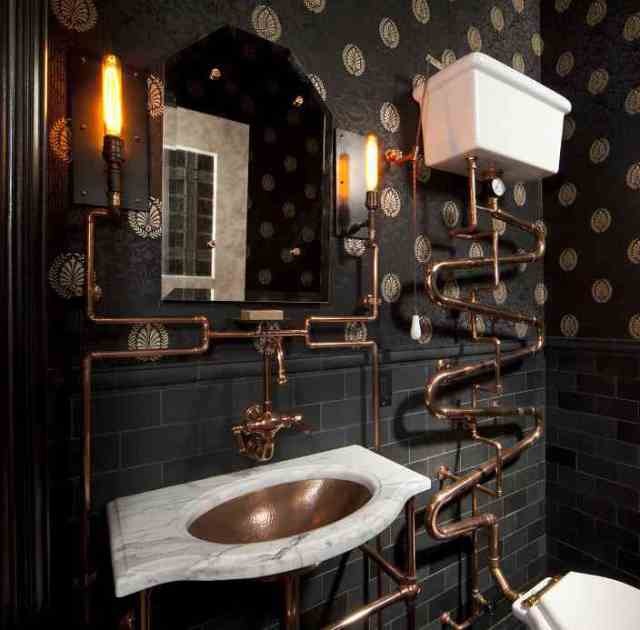 “Confessions of a Window-Peeker,” I might title this post, although since it’s about Hohenadel House’s new bathroom that’d probably give off the wrong impression, d’oh.

But I am pretty nosy, which I pronounce “noosy” for some reason (BTW, anyone know why locals add an extra “o” when we say it out loud? Or is the word “newsy”…?).

Whatever ya call it, I  loooooooooove seeing how people fix up their homes, and how their spaces serve them. What fun to walk the dog as the sun sets, while families gather on couches, at dinner tables — talking, eating, laughing, reconnecting after a busy day.  Little neighborhood vignettes in 3 to 5 -second glimpses, one after another down quiet twilit streets:

Wow, that kid is cranky…  Is that lime green or neon?…  They must’ve knocked out a wall for that kitchen… I wonder how safe that bike is on the porch…

<screeching stop>  WHAT THE..??! Is that a mad scientist’s lab?!   Does Rube Goldberg poop there?

That’d have been my reaction, had I caught sight of the “steampunk” bathroom Mike and Felicite are creating for Hohenadel House. So far, they’ve got the room wired, tiled and ready for Industrial Age accents like exposed pipes, copper/brass hardware, stenciled wallpaper and old time Edison lighting. How about a vintage sewing table for a vanity? (minus the sewing machine, of course) Felicite got the idea browsing for inspiration on houzz.com, a popular home design website/app (kinda like a mash-up of Pintrest, Polyvore and Angie’s List). The original concept for a Steampunk bathroom, however, can be attributed to San Francisco residential architect Andre Rothblatt, whose distinctive design was featured in a July 2012 edition of California Home Design. The photos went “viral” and sparked countless variations on this fanastical, tongue-in-cheek style that’s practically a movement in fashion & literature as well (there’s even a Steampunk World’s Fair every year in Piscataway, NJ).

While Steampunk recalls familiar historical imagery, it’s still purely fictional. The first indoor bathrooms were, in fact, quite simple constructions. A cone-shaped “hopper” design (here’s a modern facsimile) over a trap door or a litterbox-type pan came first, then the “pan closet,” where you’d sit on an earthenware basin above a copper pan of water that tipped to empty into a drainage system below. Both of these methods proved pretty gross — just imagine the splashing and contamination!

Finally with the advent of the “water closet,” a direct line was established from a fresh water source (usually a tank in the attic) to the toilet and then into a sewage pit outside the home. Various inventors worked tirelessly throughout the 19th century to improve the sanitation & convenience of indoor plumbing. As with most trends, home toilets caught on first with the rich, who immediately set about finding ways to show off with them:

Pedestal models proved most popular, highlighted with elaborate patterns and fanciful names. Popular examples were the English Lion and the Dolphin models. The Dolphin curled up into a letter S, the bowl in the shape of a fluted shell. (Carvings of dolphins had separated the seats used by the Roman soldiers in the privy at Timgad, an ancient Roman city in what is now Algeria.) A Dolphin water closet of Edward Johns & Co. won a Golden Award for design at the Great Philadelphia Exhibition in 1876. (The company today, Armitage Shanks, has reproduced the original “Dolphin Suite,” complete with mahogany toilet seat, vanity doors and polished brass taps and fittings.)

Underglaze patterns became popular, too, as well as hand-painted patterns of birds, flowers and fruit. Usually applied after the glazing, particularly with fireclay and similar materials, these underglaze decorations were less permanent. Gilding was the most expensive decoration: a specially-prepared gold, ground down with alloys and flux, compounded with turpentine and oil base, was applied by brush on an already embossed pattern.

As bathrooms became fixtures in modern housing, these elaborate styles gave way to function & practicality while the wealthy focused their design efforts on “jet” tubs and stained glass privacy windows for their posh Victorian homes.

Now in 2014, Felicite’s “Steam Punk Potty” is a cheeky celebration of Hohenadel House’s industrial roots, and a nod to the new wireless technologies she & Sean promote & innovate at BuLogics (recently relocated to the Oddfellows building on Ridge avenue).

You might say its next best thing since splinter-free toilet paper! One thought on “Felicite’s STEAMPUNK POTTY”