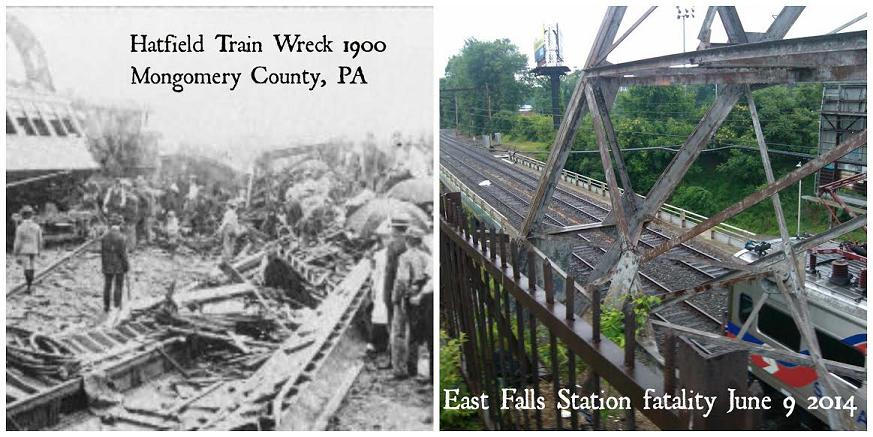 “The repetition of serious or fatal accidents, by which men, women and children are crushed, decapitated, cut in two, or dismembered loses its effect by its frequency. The cases fall one by one, upon the public; we are told that, in the usual phrase – “the accident was inevitable and no blame is to be attached to the driver;” the survivors gather up the reeking remains of the victim – and the matter passes away and is forgotten.”

We came across the scene of a fatal SEPTA accident this morning near the Scotts Lane crossing of the Manayunk/Norristown line. A person had been hit at the railroad crossing and killed, judging by the presence of two body bags at the scene.

The train was stopped a few feet short of Indian Queen Lane as police investigated the cause. Numb locals near the scene speculated about the victim, attributing the person’s death to drugs or alcohol or a suicide wish. All seemed to agree that a person’s faculties must be seriously compromised, to ignore the rumble of an oncoming train. Not one person mentioned driver error, equipment failure, or the motives of SEPTA management. But such accusations against railroads were common in the mid 19th century, as the burgeoning railroad industry began to introduce faster locomotives, heavier cargoes, and night operations, while relying on primitive safety technologies.

Train accidents earlier in the century were relatively infrequent and with less loss of life, owing to engine speeds that rarely exceeded 15 miles per hour and light traffic. As trains picked up speed and size after the Civil War, the reduced margin for safety made accidents surprisingly common. These problems were exacerbated by poor communication in the age before the telegraph. As a result, stations could not alert  one another to changes, often running their trains in opposite directions on the same tracks, with predictably tragic results.

The most dangerous accidents, and the most frequent, were rear-end collisions in which train cars “telescoped” through each other, crushing passengers. These collisions could also result in infernos when open flames from coal stoves and oil and kerosene lamps ignited the wooden-framed cars.

Other dangers included “strap rails” that were essentially wooden rails with iron overlays on top. Heavy use or shifting ground from heavy rains often caused these tracks to separate, causing numerous derailments.

In 1841, one such derailment occurred at the Falls of Schuylkill station, when “the softness of the earth” due to the “continued wet weather” caused the rails to separate and a passenger train to be:

“Thrown off the track and down into an embankment of three or four feet and turned completely over.”

Fortunately, the passengers suffered only “minor cuts and bruises” and avoided potential disaster because the “coupling chain attaching the locomotive to the passenger car broke, preventing the dragging of that car.”

Amid the spate of accidents, train companies refused to invest in warning signals or crossing guards, even when prodded by elected representatives. Naturally, outraged editorials appeared in newspapers across the country, with some calling for banning of railroads in cities or limits on train speeds to “no faster than a man can walk.”

As the 19th century drew to a close these complaints began to die down as a number of technical inventions improved the safety of trains. Most notable was the production of steel, which both improved the safety and weight-bearing capacity of train axles and rails, as well as the structural soundness of bridges.

Other notable inventions were automatic electric signals and Westinghouse air brakes that provided far more stopping power than archaic hand brakes. These advances made rail travel one of the safest modes of transportation in the 20th century.

They also changed the tone of discussion around train fatalities. People no longer blame “evil” railroad tycoons (we’re short on those mustache-twisting types anyway) or the local transportation authority when these stories make the news.