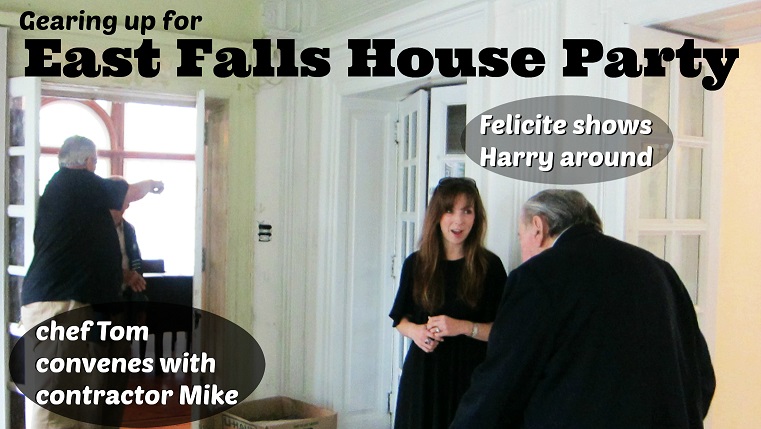 Last week, Harry Prime came out to Epicure Cafe to meet Hohenadel House’s Felicite Moorman, and have a look around the grand ballroom he’ll be performing this October 18th. He brought his friend, fellow performer Bill Parsons, for a nice lunch and then a tour of the mansion. Harry was full of stories about almost every inch of East Falls — except 3617 Indian Queen Lane! Though he traveled the road frequently as a kid on his way to baseball practice, he had no recollection of any mansion. When he finally arrived at the doorstep, he took a big look around and exclaimed, “Nope. Never saw this place!” But then, once inside, he marveled at every detail. “I can’t believe this was all right here in East Falls!” he exclaimed more than once, truly surprised and thrilled by this opulence right under his nose all those years.

He may not have recalled the house, but he certainly remembered the beer! Harry told us that Hohenadel used to import “big railroad cars” full of imported German hops that no other brewery could get (the trains came from NYC). Then, in the late 1940’s, the special deliveries stopped coming, and that year was what they called “the bad batch” that, unfortunately, became the brand’s new standard.

Harry said the guy who changed the recipe was named “Moore,” and nobody liked him. But the guy before him was amazing — Chickie Hohenadel, they called him. Wonderful man. Harry told us the brewers there were big stout German guys in leather work pants, a fun social rowdy bunch. Some Summers, Harry’d score part-time work helping with mail delivery routes — his favorite one of all was the route that went from Ridge up Indian Queen Lane, and ended at the brewery. The guys would call him into their work room, and in the middle sat a huge vat of fresh Hohenadel beer.

They’d be all, “Hey! Harry! Sit down….” and they’d pour him beers and tell dirty jokes and then send him off staggering home to his mother. Who was, perhaps oddly, not all that uncool with it.

Harry remembers Hohenadel beer, too — he said the only modern beer he’s had that tasted like Hohenadel was a Sam Adam Autumn lager, which was close. When we told him we were bringing back the original recipe, he was speechless. “Really? You can do that?” Of course we explained how the actual recipe disappeared with the company, but we had a Princeton, NJ craft brewer try to recreate it historically.  Harry will be the only one there who can tell us how close we came! The grand ballroom brought Harry back to the days his music filled the hippest clubs to capacity:

“I’d look out at the sea of kids — everyone all dressed to the nine’s, everyone just standing there, waiting for the music to start so they could dance. And they danced! Every song! We’d play all night, oh boy, the whole orchestra would keep going, and the dancers…. Oh! The jitterbugging I’ve seen!”

Might be a jitterbug siting or two October 18th — East Falls House Party has been featured on MeetUp.com for Live Vintage Music enthusiasts, and several local music history blogs have sent some love, too. We’re hoping to fill the ballroom for Harry, and make some mighty applause for our hometown boy who’s still wowing ’em in his 95th  year.