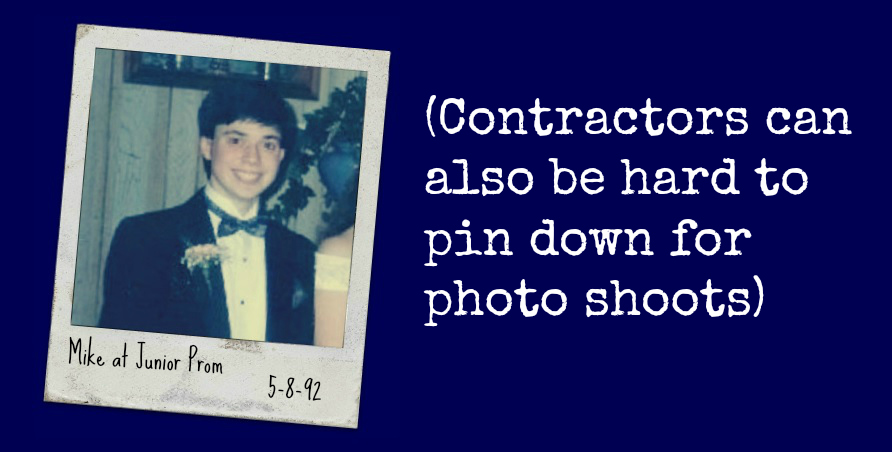 After overseeing six months of round-the-clock repairs, refinishing, reproductions — even whimsical fabrications — at 3617 Indian Queen Lane, he might know every inch of that mansion but he was totally in the dark about East Falls House Party coming up in two weeks. (Ed note: we totally blogged about it back in June so he only has himself to blame, ha)

He found out about it at the end of last month, when he popped into Epicure Cafe for coffee and Tom asked him how much pressure he felt to get the house finished before the party.

“First I thought he was talking about my house, where I live. But I’m moving soon so I thought maybe a housewarming? But that didn’t make sense…” When it became clear that Tom was referring to a catered event at Hohenadel House, Mike “just about passed out from panic.” We don’t blame him. When we showed EFHS‘s Ellen Sheehan and Patty Cheeks around the house last August, they shook their heads and suggested we contact Penn Charter to see if Timmons House was available. Both of them felt strongly there was absolutely no way Hohenadel House would be ready by October 18th.

But the gauntlet was thrown, and Mike and his crew rose to the challenge. This project has already pushed to reach financing deadlines, but with East Falls House Party on the horizon, now, the guys are in “warp speed.” All hands on deck! Patching holes, retro-fitting antique fixtures, recreating period trim and finishing — not to mention the house’s outside, which Mike wants to re-stucco for the party even though that’s technically a “Phase Two” task.

But his parents are flying in from Florida, and let’s face it: Mike is showing off. And why not? The guys of MG Labetti Associates, LTD have been busting their humps for the last six months — a quick look around, and you can see they’ve earned their bragging rights. We caught up with Mike last week at Billy Murphy’s to check in on the progress. We’ll let him take over, in his own words for the most part. Edited for clarity and brevity, Mike’s interview, below, reflects his passion for building, pride in his work, and a real delight in seeing his projects revitalize a neighborhood he’s adopted as his own.

“We’re coming to town! 4614 Ridge Ave, right next to the Beer Distributor. Used to be a storage building for the Pennsylvania Ballet, but we’re remodeling it, putting offices in.

The Mason’s building roof has been sagging for years, we wanna tighten the stabilizing bars that run along the roofline where those stars are set in the stone. We’re doing up Slices’ storefront. The eye doctor, Golden Crust and the pharmacy, too. Make things nice.

OH MY GOD! Dealing with the bank on the house! They agreed to pay so much money for so many projects, and then they send this inspector out to decide how much we’ve done, and pay us based on that percentage.

But we’re finding stuff all the time that needs work, that’s not on the list. Gotta fix it, once we find it. The bank dude’s a great guy — used to be a contractor — I don’t blame him that he can’t pay me for work I can’t get to yet. But it sucks. This job is my ‘Money Pit,’ I’m not kidding.

The steampunk bathroom. Not on the list, by the way. But fine, they needed an upstairs bathroom. Three hundred bucks worth of copper for that flush pipe alone.

And those shutters! Not on the list, again. But that time I got ’em for $7k and we did it. Four shutters per window, sixteen windows — that’s a total of 64 shutters taken down, scraped, sanded, repainted, rehinged and replaced. Took four guys a week.

Did you see the porch come down? The guys were knocking at it with sledgehammers. I came back with my truck and a tow strap, tore it off! Those supports are original, we’ve gotta be careful restoring them and then somehow I gotta use ’em in a design for an overhang about five feet out for seating (the original was only half that).

The dogs are crazy, barking all the time when we’re working. The family’s always in & out. Never worked a job where the family tried to live through construction like this, it’s unreal. They’re great, though, we all get along.

Adding two more clear coats to the hard wood floors before the party, and we’re installing dimmer lighting that Sean & Felicite can control with their phone. Tomas and his assistant laid over 12,000 feet of wiring in ten days, everything’s all networked and ready for World Domination or something.

Gotta get the boiler heat working! That turret room is a nightmare, the pipes are all weird because that one wall is curved. Had to tear up the floors to access them properly, no one wanted to crawl around down there. Some of the pipes had even burst over the winter when the house was vacant. A real mess.

And that ballroom, all the plasterwork. Seriously. This was a two year job, not six months. There is no way I am making money on this house, but I like the challenge. I’m gonna like it even better when we open the doors and everyone can come in and see. Ha! Six months!

The next six months? Say good bye to the big empty ballroom, we’re putting in a gourmet kitchen with a big buffet for entertaining. A double-level, wrap-around deck off the back of the house. Maybe a pool or treehouse.