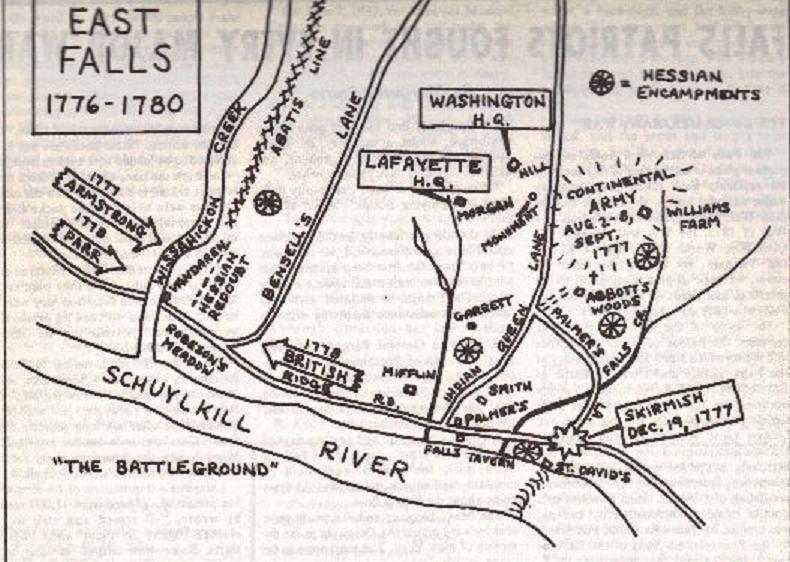 It wasn’t as famous as Paul Revere’s warning, but the cry “The Hessians are coming!” was, for many colonial Americans, a terrifying prospect. And in 1777, our own Indian Queen Lane in East Falls was “Ground Zero” for an entire encampment. This area was strategically important as a major thoroughfare into the heart of Philadelphia, and it was also flush with natural resources. The Falls were prime fishing grounds, and the forests teamed with game.

They even had a pub! Falls Tavern — then known as the “Rock Fish” saloon — had been feeding, sheltering and liquoring up local outdoorsman since the early 18th century. How talk must’ve turned at the bar, when word got out that the Hessians were on their way!

Surely, the upper-class travelers at Fort St. Davids were quaking in their boots — the Hessians apparently came right for them. They tore off the Fort’s doors to build their huts, and then later torched the place when Howe withdrew from East Falls as part of his evacuation of Philadelphia.

So yes, the Germans had a tendency to be a tad… shall we say… enthusiastic (?!), but there’s another more damaging effect the Hessians had on America; one that went beyond their smoothbore muskets and bayonets. And it would’ve petrified a brewer like Hohenadel to see it—the Hessian Fly:

“[t]he insect had apparently hitched a ride from Europe with some Hessian mercenaries employed as soldiers by the British, hence its name. First noticed in straw used at a military encampment on Long Island, the fly slowly extended its range, endangering the continent’s wheat fields for many years.”

So this very tiny, adaptable variety of Hessian waged its own War Against the States, attacking the colony’s wheat resources — endangering an important food source and our BEER SUPPLY!  For the first hundred years of American history, wheat was a primary staple in the production of beer. The damage done by the Fly was most evident in the country’s “wheat basket,” Albany, New York.

Since the mid 17th century, Dutch brewers in Albany (and throughout the Hudson River Valley) made a strong type of wheat beer called Albany Ale. With the appearance of the Hessian Fly in the 18th century, the devastation to wheat crops forced the brewers to change to barley as their primary brewing grain.

It took decades for the region to recovery from the twin scourges of the war and the Hessian Fly, but the new “Albany Ale” eventually restored Albany to its place as the St. Louis of its day. In fact, the ale became so popular that it was shipped to almost every state in America. Still, can you imagine the terror it must’ve struck in a brewer’s heart when he first encountered Hessian midges on wheat stalks?

And why did Americans suspect the Hessians of transporting flies? They had a reputation for crudeness — perhaps unfounded, perhaps related to their rather clunky palate, including such specialties as jellied veal sausage, boiled eggs in “green sauce” (more eggs and herbs) and a particularly interesting dairy delicacy known for it’s… uh… musical qualities.

Handkäse, is a strong Frankfurt cheese made from sour milk, and then on top of that, it’s often served “mit Musik” (“with music”) — a dressing of vinegar and onions that usually has diners “trumpeting” for hours afterwards.

Perhaps it was no coincidence the Americans camped up wind at what is now the site of the Queen Lane Reservoir. Thanks to the Chadwick Papers*, we know of two Hessian commanders who were encamped in the East Falls area:

Wilhelm von Knyphausen. He was second-in-command of the Hessian forces in America. His regiment was encamped in the vicinity of Abbotsford lane, now the site of the Queen Lane Reservoir. An extremely experienced military leader, he was described as “a taciturn and discreet officer, who understood the temper of his troops and rarely entered on hazardous exploits.” He led troops in many battles from 1776-1782, before returning to Europe having achieved, in his words, “neither glory nor advancement.”

Count Carl Emil Ulrich von Donop. Colonel von Donop‘s men were camped in the vicinity of what is now Vaux and Ainslie Streets. von Donop himself was said to have stayed in Samuel Garrett’s house at that intersection prior to the Battle of Germantown. He was regarded as an able officer but was short-tempered and disliked by his men, probably because of the severe beatings he inflicted on them.

von Donop had a more colorful history in America than Knyphausen, mainly because he was a glory seeker and died in battle chasing it. But he also had an independent streak that contributed to the British defeat at the Battle of Trenton.

Rather than advance on Bordentown, New Jersey, to be within supporting distance of commander Rall at Trenton, von Donop decided to spend Christmas Eve 1776 with a “beautiful widow.” This widow, who may have been Betsy Ross, is credited with keeping von Donop out of position during a critical time when he could have come to Rall’s assistance. It’s believed that this humiliating defeat led von Donop to volunteer for a hazardous mission at the Battle of Red Bank, where he died of a musket ball to the hip.

*A collection of newspaper clippings from Alex C. Chadwick, Editor of The Suburban Press in the 1930s.