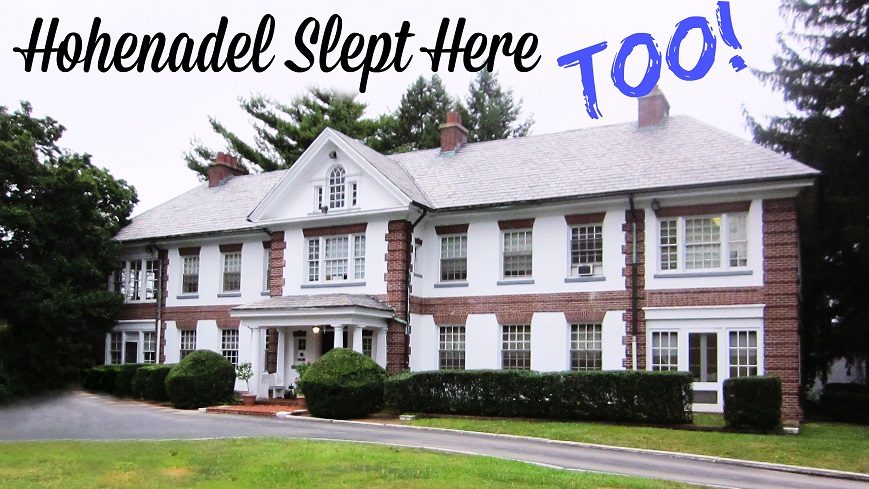 Yep, just when we were digging for more details about the Indian Queen Lane house, we find a whole ‘nother Hohenadel House. A few blocks north, the Timmons House was John William Hohenadel’s last residence in East Falls, a spacious colonial revival mansion now serving as an events & reception hall on the grounds of William Penn Charter School.

Built in the early 1900’s by Henry Waterston Brown, the house sits on The Oak Road, a tiny lane just a single block long, between Schoolhouse Lane & Midvale. Brown himself created The Oak Road before Penn Charter had yet moved to its location on School House Lane. Rather than fell an ancient oak in the road’s path, Brown built around it, which led to the road’s unusual name.

John Hohenadel and his family moved into the house from Indian Queen Lane in 1937.  He quickly added his own custom details such as a “ratskeller” (a German bar) in the basement, similar to the one on Indian Queen Lane. No info yet on whether there are murals in this one, but we’ll tour the house soon to find out. Mural in ratskeller of Hohenadel House on Indian Queen Lane

We’re hoping to discover even more about the house (and the Hoheandel family) from an actual Hohenadel! We’re excited that we’ve finally located John Hohenadel’s grandson. We chatted with John Jacob Hohenadel Jr. recently — he’s 70 years old, living in Connecticut — and are in the process of arranging a more thorough interview soon to hopefully fill in some gaps in our timeline. And maybe just maybe (fingers crossed), we can talk him into sharing some family photos and pictures of memorabilia.

Regarding the ratzkeller, John Jacob Jr., who “had every Sunday dinner at the house,” maintains there was a lot of drinking done, even during Prohibition. He and his family lived on Fox Street and Queen Lane for about 11 years after the Timmons House had been sold.

What was it like “growing up Hohenadel.” We’ve got a ton of questions we’ll ask John Jacob in an upcoming interview (see below). Got questions you’d like us to ask? Leave ‘em in the comments field below!

First, we’d love a brief history/bio: birthdate, location, brothers, sisters, family, etc. Is there a story behind your name, “John Jacob” ? Do you have a son John…?

Do you know if your family belonged to a church or any kind of religious organization in East Falls? (we could always use another source for documents!)

There’s an interesting item in your 2007 Penn Charter interview where you recall a serving tray in your grandfather’s house with characters on it that actually resembled family members. We’re wondering if you might recognize the carved faces in the main fireplace at Indian Queen Lane…??? Photos here, if you’d like to see. (They’re the 2nd and 3rd photos in the slide show.)

We would love to hear any random stories/memories of your father & grandfather, and of the brewery and even of your time in East Falls.

We’ve heard rumors about Underground Railroad activities around Hohenadel properties — have you ever heard any?

And pictures!!   Wow we would L-O-V-E photos of you, of your family — of the brewery or holidays in the Timmons house or backyard BBQ’s or anything, really, to help bring to life the names in our timelines and histories.

This fall is a big season for “Hohenadel House”: local craft brewers are recreating your family’s original German lager recipe (as close as we can get) for an event in the restored Indian Queen Mansion. We would be honored to include your words or pictures in our upcoming celebration.

Finally, we’ve attached a document: “Gertrude Hohenadel”— a dubious/convoluted history we encountered online, which appears to have originated on the genealogy site Ancestory.com. Would you please review it and let us know if it’s accurate? We did our best to verify the information using city directories, census reports, maps, etc., but we’ve still got some question marks…

Looks like the “John/Johann William” Hohenadel who built the brewery at Conrad & Indian Queen Lane died in 1878, not even four years after he built it. His wife Mary ran the business for awhile and then their son, “John W”, took over during the most profitable time in the company’s history, thru Prohibition, and after.

The big question we’ve got: was “John/Johann William” (who built the brewery in the late 1800’s) your great-grandfather, or your grandfather?