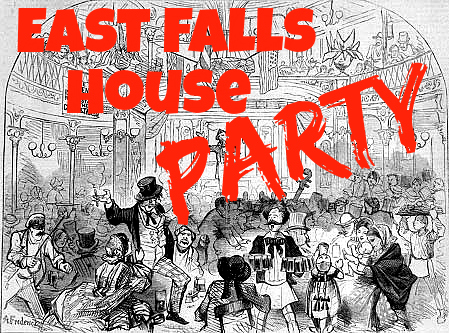 A century ago, when friends called on John Hohenadel at his grand mansion on Indian Queen Lane, they likely joined the old brewmaster in his basement parlor — his “ratzkeller“– for some of his Falls Brewery beer. His plant a few blocks up on Conrad Street produced more than 30,000 barrels a year, the last and most successful enterprise of the family’s 83+ years in East Falls, brewing beer & running saloons, hotels & dancehalls.

It’s been more than half a century since anyone’s enjoyed the crisp, hoppy bliss of Hohenadel’s  famous German Lager. This October 18th, East Falls Historical Society pairs with award-winning historical brewer Tom Coughlin to bring back East Falls’ most famous brew — in the Victorian majesty of Hohenadel’s newly-restored mansion, yet.

A Throwback Worth Drinking

So-called “archaic beers” have become popular in recent years , with breweries like Yards, Victory and Dogfish Head reproducing lost old brewing traditions of colonists, monks, Vikings — even Sumarians. Unfortunately, historic ingredients — authentic though they may be — tend to have limited appeal for modern “Budweiser” palates.

Hohenadel’s lager recipe, however, is similarly mild, light and refreshing. Both fall into the same “family” of beers that came to the New World illicitly, by way of Philadelphia, in fact. German brewer John Wagner smuggled his country’s highly-guarded lager yeast along when he immigrated here in 1840. His recipe spread like wildfire and revolutionized popular drinking. Today, 90% of the beer purchased in the US is “Light American Lager.”

Q: What does American beer have in common with making love in a canoe?
A: They’re both f—-g close to water.

While Hohenadel’s recipe will be familiar to today’s beer drinkers, there’s no mistaking its uniqueness: earthy and bready, with clean Bohemian hops, plus the grainy sweetness of corn. American lager at the turn of the 20th century was a proud product of artisanal brewers, made with the best local ingredients. Prohibition changed that, when all but the biggest breweries closed, and many local recipes disappeared. When the 18th amendment was repealed 13 years later, the Great Depression was in full swing, with WWII on the horizon. Ingredients and skilled brewers were scarce but Americans demanded beer — quick, cheap and easy. This desperate landscape produced the pale bland profile of our country’s signature mass-market brews. Happily, the story doesn’t stop there.

Tom Coughlin’s recreation for the East Falls Historical Society is based on the definitive brewing text from 1902. He used a 19th century yeast strain, and a type of “cluster hops” common in this part of the country at the time. He fermented this recipe in the most “lagery” corner of his basement.

Of course, there’s no way of knowing whether the results actually taste like real Hohenadel beer. Instead, Tom’s hand-crafted lager is a tribute to the traditions Hohenadel represented. A chance to experience the fine German beer that once flowed from the tavern taps of Ridge, Midvale and beyond.

Also: an excuse to celebrate a beautiful local work in progress, the historic Hohenadel Mansion.

An architectural gem with stunning details: stained glass, sculpted woodwork, gilded mirrors, a hidden liquor cabinet, and a ballroom with sweeping Grecian ceiling reliefs. Sold by Hohenadel in the 30’s and left to disrepair for decades, the house is once again a cherished family home, in the process of being fully restored, inside and out, thanks to the hard work of MG Labetti Associates.

So far, “Phase One” has been completed, including necessary but unglamorous updates such as new plumbing, wiring, heating and lead paint removal. A great deal of cosmetic work, too, but with four stories, five staircases, sweeping windows and Victorian embellishments, plenty of Goth-y rough edges still remain to explore, and inspire mystery.

As a “Thank You” to East Falls’ helpful organizations and supportive community, owners Sean Hawley and Felicite Moorman are opening their doors for a special evening of food, song and history.

East Falls’ most famous brew returns for one night only.
Join us for an unforgettable evening.