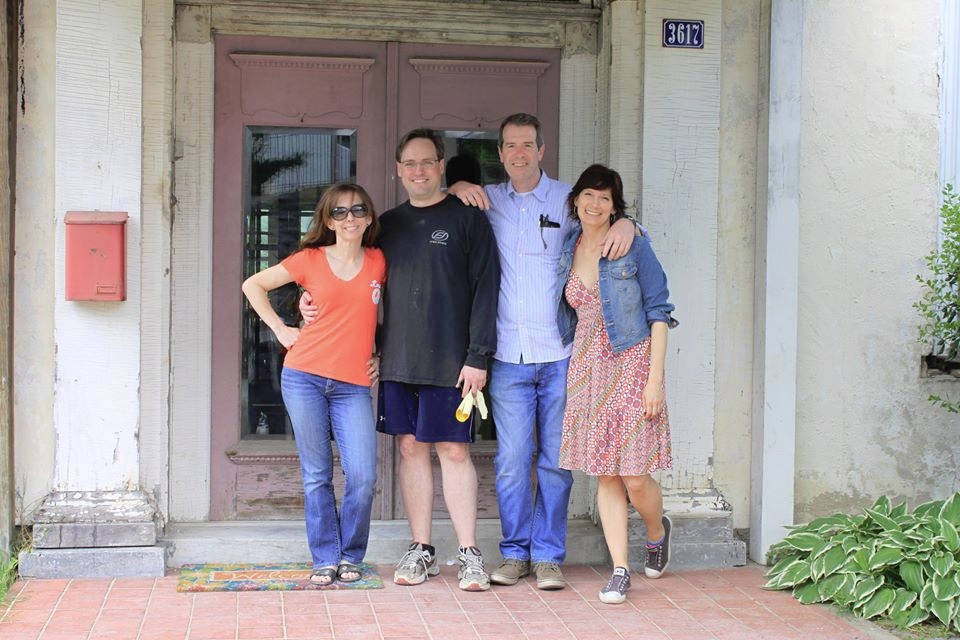 Also — he’s a way nice guy to come out from South Philly to share his thoughts on Hohenadel House with us. And to take our picture, although of course in retrospect now it’d make more sense if it was Joseph Minardi in the frame with Sean and Felicite…

But he was the one with the giant camera, so we instinctively deferred.

You also tend to trust a guy with such a well-honed eye for detail & composition. Joe’s recent book on East Falls/Roxborough/Manayunk architecture is full of intriguing photos… but only one of Hohenadel House. Seems requests to access the home’s interior received no reply from the real estate agent handling the listing at the time of publication, boo.

This past weekend, we met Joe for lunch at Billy Murphy’s, where he ordered the aforementioned fish tacos (verdict: yum!) and gave us some scoop on his new book, his old job, and his love of the historical ‘hoods of Philadelphia. Then we swung by Hohenadel House for a tour with Sean & Felicite, who were happy to take a break from chemically stripping wooden cupboard drawers.

See Joe’s pictures here… And here.  Joe’s insightful comments tipped us onto new research we’ll soon be following up on. For instance…

Why is the ornate plaster ceiling Grecian in motif — in a house of Italianate style?

Was Hohenadel House’s “hidden” bar a modern creation or a necessary convenience during Prohibition?

Are the carved faces in the house’s main fireplace modeled after actual children living in the house, as was a custom of the wealthy during Victorian times?

Might that crawl space between the second and third stories be evidence of Underground Railroad activity?

Perhaps a Hohenadel House tour in the Fall…? Stay tuned!